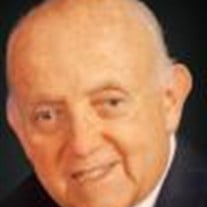 Dr. Luis Alberto Reinoso, retired physician, civic leader, devoted father and husband, died on March 6, 2021 at his home in Tulsa. He was 91. The cause of death was complications related to progressive dementia and multiple myeloma. Born in Arequipa, Peru, Dr. Reinoso ("Lucho" to many friends) immigrated to the United States in 1957. He and his wife, Maria Cristina raised their five sons together. He lived in Tulsa for 53 years. Lucho lost his father at the age of two. His mother raised him alone on her income as a seamstress. Radio and newspapers sparked his imagination as a young boy. He used to track troop movements and write world leaders, including FDR during WWII. For a time Lucho seriously contemplated entering the Catholic seminary, but chose a career in medicine instead. He did his American medical residency in Baltimore, then moved to Western State Hospital in Hopkinsville, Kentucky. On a visit to Peru, his friends hosted a dinner party for him, where he met his future wife. Three weeks later they were engaged. Shortly after the newlywed couple settled into their home in Kentucky, a would-be assassin, in a case of mistaken identity, shot Lucho twice in the torso. When the first hospital to receive him nearly gave him up for dead, his new bride arranged for his transfer to Vanderbilt University Hospital, where he eventually recovered after several weeks. After his recovery, Lucho and his wife moved to Oklahoma, where he first worked in Vinita. He later transferred to Hissom Memorial Center in Sand Springs, where he would spend the rest of his medical career. In 1971, he became an honorary Peruvian consul serving Oklahoma, Kansas, and Missouri. In 2006, he received a commendation medal from the President of Peru for his 37 years of service to Peruvian citizens in the United States. Lucho was a member and leader of many local civic organizations. He was named by then-mayor James Inhofe to Tulsa's first Hispanic Affairs Commission and was one of the founders of the Hispanic American Foundation of Tulsa. In 1992 he was appointed to the Governor's Advisory Council on Latin American and Hispanic Affairs. He served as president of the International Club of Tulsa and as a board member of the Community Service Council of Tulsa. He actively participated in many other professional and service organizations including the American Medical Association and Knights of Columbus. Patriotism, academic rigor, appreciation of the arts, and abiding dedication to service were values that Lucho instilled in his sons. He traveled to as many states as possible, and encouraged his sons to travel the world. He never missed an opportunity to invite friends and strangers alike to dine with the family at home. Lucho will forever be remembered for his generosity of spirit and his love of his family. He was a consummate gentleman who welcomed everyone with a full and open heart. Even as his health deteriorated towards the end, he always had a kind word for everyone. Of all his accomplishments, Lucho was proudest of his family. Lucho is survived by his wife of 55 years, Maria Cristina and his sons, Luis Enrique (with wife Mary Pily and daughter Miranda), Victor Andres (with wife Gabriele, son Roberto, and daughter Camila), Francisco Jose, Ricardo Antonio (with wife Alyson and daughter Fiona), and Juan Pablo. The Reinoso family extends its deepest gratitude to the kind care provided to Lucho during his final few days by Hospice of St. Francis Hospital. A Rosary will be held at St. Rita Chapel of Cascia Hall Preparatory School on Monday, March 15, at 5pm. The Funeral Mass will be held at 11am at Church of Saint Mary on Tuesday, March 16, followed by interment of ashes at Calvary Cemetery. (In the interest of public safety, the family requests that all guests maintain social distancing and wear masks at all times.) In lieu of flowers donations may be made in Lucho's memory to Catholic Charities or the Hispanic American Foundation. Fitzgerald Ivy Chapel, 918-585-1151

Dr. Luis Alberto Reinoso, retired physician, civic leader, devoted father and husband, died on March 6, 2021 at his home in Tulsa. He was 91. The cause of death was complications related to progressive dementia and multiple myeloma. Born in... View Obituary & Service Information

The family of Luis Alberto Reinoso created this Life Tributes page to make it easy to share your memories.

Send flowers to the Reinoso family.