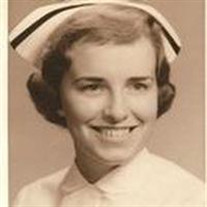 DeLesDernier - Margaret Mary, 74, of Tulsa OK, passed away from pancreatic cancer on September 24, 2009, at home surrounded by her family. Born September 3, 1935 in Lynn, MA, to Augustus and Basilia Ventura. When Margaret was a nine year old girl, she and her mother saw a boy selling newspapers. Her mother said, "Look at that poor boy selling papers in the cold." Thirteen years later, that same boy, exited an elevator at the hospital where she worked. Margaret saw him and said, "That's the man I'm going to marry'. His name was Stanley Herbert DeLesDernier. Three years later, they were married. Margaret was a graduate of Lynn Hospital School of Nursing. In Tulsa she was a nurse at St. John Medical center in high risk OBGYN. Margaret's many talents included quilting crocheting, and sewing. She also donated large amounts of fabric for various quilting charities. Margaret was a woman of tremendous faith, she was continuously called on to pray for others. She was very active at St. Pius X School, particularly with fund raising activities and volunteered at Catholic Charities Madonna House. Margaret was instrumental in bringing the EWTN network to the Cox Cable system, but her greatest achievements were inside the walls of their home. She is survived by: her husband, Stanley, "Pete" and her five children, Peter, Anne, Paul, Martha, and Mary; one brother; three nieces; one nephew; nine grandchildren, and one great-grandchild. Margaret prefers that donations be made to EWTN, 5817 Old Leeds Road, Birmingham, AL 35210. Visitation is from 5 - 7 p.m., Monday, September 28, followed by a Rosary service. Funeral will be held on Tuesday, September 29, at 10 a.m. Both services at the Church of the Resurrection. Fitzgerald Southwood Colonial Chapel, 918-291-3500. www. southwoodcolonialchapel.com

DeLesDernier - Margaret Mary, 74, of Tulsa OK, passed away from pancreatic cancer on September 24, 2009, at home surrounded by her family. Born September 3, 1935 in Lynn, MA, to Augustus and Basilia Ventura. When Margaret was a nine year old... View Obituary & Service Information

The family of Margaret Mary De Les Dernier created this Life Tributes page to make it easy to share your memories.

DeLesDernier - Margaret Mary, 74, of Tulsa OK, passed away from...