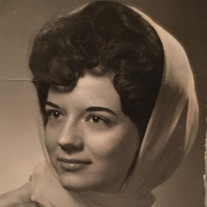 Margaret Ann (Justus) Hawthorne July 1, 1939 - February 25, 2021 Our precious Margaret Ann (Justus) Hawthorne went Home to her Heavenly Father on February 25, 2021 at 4 a.m., she was surrounded by family and loved ones in her Broken Arrow home. Margaret was born on July 1, 1939 in Booneville, Arkansas, as the Daughter of Euria Archie Justus and Bertie Angeline (Lemay) Justus. Margaret attended Southwestern Assembly of God University, where she met William Wallace Hawthorne and gave him the nickname "Wally." They were married in Tulsa, Oklahoma on October 12, 1963. All of her life, Margaret was quick to tell, her one true love was Wally Hawthorne. They were married 57 years at her passing. Margaret actively served the Lord, in many capacities, all of her life. Before meeting Wally, as a young lady she started the Maranatha Singers. A group of 16 Jr. High and Highschool Teens who traveled ministering in Oklahoma, Kansas, Texas, and Arkansas. She and Wally later served as the Jr. High and Highschool Department Leaders at Sheridan Assembly. Margaret taught at Rhema Bible Training College where she began the Rhema Choir known as Faith's Creation. She and Wally served as Sunday School Department Heads for Victory Christian Center and Margaret taught at Victory Bible Institute for more than 30 years. Margaret was a known Prayer Warrior and headed up the Victory All Church Prayer Ministry for 25 years. Her Faith took her on a path that knew no strangers, nurtured many, and spiritually transformed countless lives forever. Her Faith was active be it in her home, with her family, her church, or in ministry across the world such as Korea, Russia, China, Ethiopia, Peru, and Ireland. A beautiful grand piano occupies Margaret's home, which she played skillfully. She readily shared this natural gift on the worship team at Grace Fellowship, as well as music ministries all over the Tulsa Area and, of course, in her home. Family gatherings around the piano, singing carols turned Christmas and other holidays into something magical. But her greatest desire was filling her home with people she loved, to play and worship in song to the Lord. Known for lighting up a room with her receptive smile and sweet demeanor, Margaret quietly took on the reputation of always thinking of others first. Margaret had a soft, contagious giggle and loved a good, harmless prank any day of the week. She was especially devoted to her family and received all of her nieces and nephews as her own. A night owl by nature, her home was a place of comfort, hours into the night for anyone, at any time, who needed a refuge to share a struggle, ministry, and prayer. Margaret was preceded in death by her father and mother Euria and Bertie Justus; along with her four siblings, brothers Bernard "Mac" Justus, Joell Dillard Justus, Thurman "Tommy" Lee Justus, her sister Norma Jean Tilley; and Cousin Linda Hooper. She is survived by her devoted husband Wally Hawthorne, her son, Steven and wife Jennifer Hawthorne, as well as, her cherished grand-children Gabrielle, Sophia, Jackson, Micah, Kingsley, and Jalynn. Along with many beloved family members, Cleo Justus, Shirley and Mike Williams, Joell Justus, Kim Blocker, Penny and Jeff Blackburn, Debbie and Craig Kuchta, Tony and Carmen Tilley, Angela and Donnie Sparkman, Johnna and Larry Roberts, Emily and Jesse Hooker, Jessica and Bob Lagola. As well as, a host of other beloved family members and friends who will greatly miss our dear Margaret. Prayers for the family during this time are treasured. A Memorial Service to Celebrate the Incredible Life and Legacy of Margaret Ann Hawthorne will be Saturday, April 10, 2021, 11:00 a.m., at Victory Church, in Tulsa. Donations for Margaret Hawthorne's Memorial Services can be made to Help Beloved Margaret's Memorial Fundraiser Fitzgerald Ivy Chapel, 918-585-1151

The family of Margaret Ann Hawthorne created this Life Tributes page to make it easy to share your memories.

Send flowers to the Hawthorne family.