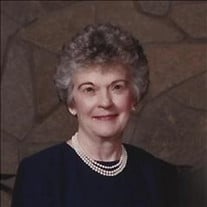 Marian Joan (Schlader) Monaghan, 91, passed away on June 18, 2022 at University Village in Tulsa Oklahoma. She was born at home on the family farm in Cresco Iowa April 30, 1931, to Virgil and Gladys (McCarville) Schlader. She was the sixth of nine children and the first girl of the family. At the age of one, due to the depression, her family moved to a farm in Floyd Iowa, where she attended school, eventually playing girls high school basketball. At age 15, the family moved to Bassett Iowa and she attended Immaculate Conception high school, where, disappointingly, there was no girls basketball. After graduating at age 17, she worked for several years at Oliver Tractor. She married "Red" Monaghan on September 16, 1950. They lived in Charles City Iowa and co-owned the Monaghan Brothers farming operations, until April 1970 when the family moved to Springfield Missouri. Marian was very proud of her 8 children and for most of her life was a full-time homemaker and volunteer, until 1981 when she went to work for Bass Pro Shops, where she remained for 19 years. She taught 3rd grade Sunday School and served as an extraordinary minister at Immaculate Conception Church for many years. After her children were grown, she became an active member of Holy Trinity Church, assisting with funeral dinners and singing in the church's contemporary choir. In August 2013, she relocated to Tulsa OK to be near family. Marian was preceded in death by her parents, her husband, her grandson Zachary Monaghan, great-grandson Reed Ledbetter and brothers Jerome, Bob, Ray, Don, Gene and Lyle. She is survived by her children: Greg (Sue), Jeff, Richard (Cecilia), Kevin, Brian (Lisa), Kelly (Chris), Monica and David; 17 grandchildren; 14 great-grandchildren; sister Mary Helen Kuehn; brother Roger (Anne); sisters-in-law Arlene, Mary, Laurna, and Myrna; and two lifelong friends Joan Buell and Angela Smith. Visitation will be Thursday evening June 23, 2022 6:00 to 8:00 at Fitzgerald's Chapel 3612 E 91st Street, Tulsa. Funeral mass will be Friday June 24, 2022 at 11:00, at St. Bernard Catholic Church, 4001 E 101st, Tulsa followed by burial at Calvary Cemetery directly behind Fitzgerald's. In lieu of flowers, donations may be made to Little Lighthouse 5120 E 36th St, Tulsa OK 74135, or the charity of your choice.

Marian Joan (Schlader) Monaghan, 91, passed away on June 18, 2022 at University Village in Tulsa Oklahoma. She was born at home on the family farm in Cresco Iowa April 30, 1931, to Virgil and Gladys (McCarville) Schlader. She was the sixth... View Obituary & Service Information

The family of Marian Joan Monaghan created this Life Tributes page to make it easy to share your memories.

Send flowers to the Monaghan family.