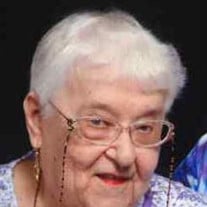 Marie Eloise Boudreaux Cathcart was born in Lafayette, Louisiana on October 17, 1927. She and her family moved to Houston when she was four. It was December 31, 1952, on a blind date that was set up by her cousins, that she met Edgar Wayne Cathcart in Tulsa. Three in-person visits, and many letters later, they wed on October 10, 1953. The following year their first daughter Ruth Marie Cathcart was born. Then a year later their second daughter Jean Anne Cathcart Helvey was born. And last but not least Margaret Michelle Cathcart Kasprzak was born three years later. The perfect trifecta. She was the very best Mom ever! She not only "mommed" all her daughters, but their friends as well. In fact during high school when we went to football games ours friends would always ask if "Mom" was coming. They loved to hear her cheering in the stands. She and Ed were married for 58 years. A few years after Ed's passing she moved into Michelle's house and spent her remaining days there. Two weeks before she passed, she played dominoes and beat the two other players. She was a kind, caring woman who, even though she might be in pain, always said, "I'm fine". And she is fine now. Eloise is survived by Ruth Cathcart, Jean and Scott Helvey and Michelle Kasprzak, grandchildren Amber Helvey and Jeremiah Clark, Caroline and Bryan Jenkins and Brandon Helvey. And finally she is survived by the apple of her eye, great grandson Arthur Jenkins. In lieu of flowers donations can be made to St. Jude's Children's Hospital. Visitation will be at Thursday at 6 :00 p.m. and the Rosary will follow at 7:00 p.m., both at Fitzgerald Southwood Colonial Chapel, 3612 East 91st Street, Tulsa. Mass of Christian Burial will be Friday, 11:00 a.m., at St. Pius X Catholic Church. Face masks are requested. Fitzgerald Ivy Chapel, 918-585-1151

Marie Eloise Boudreaux Cathcart was born in Lafayette, Louisiana on October 17, 1927. She and her family moved to Houston when she was four. It was December 31, 1952, on a blind date that was set up by her cousins, that she met Edgar Wayne... View Obituary & Service Information

The family of Eloise Cathcart created this Life Tributes page to make it easy to share your memories.

Send flowers to the Cathcart family.