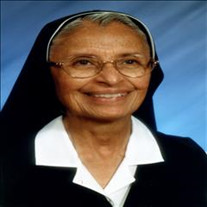 Obituary for Sr. Marie Jacinta Dorado, OSB Sr. Marie Jacinta Dorado (Mary Crispina) died peacefully on October 22, 2021 at St. Joseph Monastery, Tulsa, OK. She was born on October 25, 1928 in Shattuck, OK to Adeleida Miramontec Dorado and Bonifacio Dorado. Her parents fled Mexico shortly before their daughter was born due to the religious persecution in Mexico. Bonifacio was on the enemies hit list and they traveled across the Mexican desert to arrive in Juarez. They finally made it to Shattuck, Oklahoma. Sr. Jacinta was baptized at St. James Church in Shattuck and attended the public school. Her family life was faith-filled and she credited her parents for raising her as a person of faith and prayer. She entered St. Joseph Convent in Guthrie, Oklahoma, on December 31, 1947 and made her perpetual vows on July 15, 1952. Sr. Marie Jacinta earned a BS in Elementary Education from Benedictine Heights College in 1956, a Master's Degree in Education and Administration from the Catholic University of America in 1962, a Master in Theology from St. John's University in Minnesota in 1972, and Master in Christian Spirituality from Creighton University in 1983. Sr. Marie Jacinta spent many years as an educator, teaching in Henryetta, at St. Francis School in Tulsa, Marquette School in Tulsa, St. Catherine's School in Tulsa and Monte Cassino School. She was principal of Marquette School and Monte Cassino Elementary School in Tulsa. She also served her community as Formation Director from 1964 to 1983. In 1983, Sr. Marie Jacinta was elected Prioress of St. Joseph Monastery and served three consecutive terms in that office. She was the first Hispanic Benedictine Prioress in the United States. When she completed her term as Prioress, she began serving in Prison Ministry, the Board of Catholic Charities and directed Monte Cassino School's outreach to students with learning differences (which became the REACH Program). Sr. Marie Jacinta was preceded in death by her parents and her brother, Isaiah Dorado, and his wife, Jessie. She is survived by her niece, Annette Schwerdtfeger of Alva, Oklahoma, and her nephew, Michael Dorado of Ponca City, and the Benedictine Sisters of St. Joseph Monastery. Evening Prayer will be at 6:30 p.m. on Tuesday October 26 in the Marian Chapel at St. Joseph Monastery. The Mass of Christian Burial will be at 10:00 a.m. on Wednesday, October 27 in the Marian Chapel at St. Joseph Monastery, 2200 South Lewis Ave. Masks are required for the services. Interment at Calvary Cemetery in Tulsa. Donations in Sr. Marie Jacinta's memory may be made to the St. Joseph Monastery Sisters Retirement Fund or to the REACH Program at Monte Cassino School. Fitzgerald Ivy Chapel, 918-585-1151

The family of Mary Crispina Dorado created this Life Tributes page to make it easy to share your memories.

Send flowers to the Dorado family.