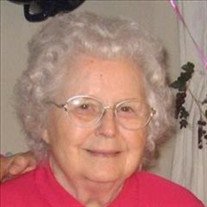 Marie Barbara Sullivan, nee Dischinger, was born on October 16,1921 in St. Louis, Missouri. Her parents were Carl Frederic and Marie Barbara Dischinger. Her younger sister, Betty Jeanne, and her parents preceded her in death. She was a Roman Catholic, attending Incarnate Word Academy and Webster College for Women in St. Louis. As a child, she loved reading, cinema, ballet, opera, symphony and art museums all of which she was introduced to and took advantage of in St. Louis. She continued these interests adding history and travel until she was physically unable to enjoy these pastimes. She married Robert Hoffman Sullivan (an Oklahoman) when he was attending dental school at Washington University in St. Louis. They were married in a Catholic service in the clerk's office at St. Ann's School in Normandy, St. Louis on February 17, 1942. Shortly afterward, they moved to Oklahoma where he began his dental practice, and had five children. With his military service beginning during the Korean War, they relocated to El Paso, Texas, where the next two children were born. Subsequently, the family moved to Bremerhaven, Germany. While there, they took advantage of visiting other European countries. Her favorite memory was seeing Pope John XXIII in Rome. Another child and three years later, the family returned to America via ship, then travelled by car across country stopping to visit family and various sights on their way to Monterey, California, where the last child was born and her husband's service ended. In 1968, the family relocated one last time to Tulsa. Upon retirement, mom and dad continued to travel extensively: China, continental Europe, north Africa, Central America and the United States. After his death, she continued to travel with family members for several years. They had nine children, fourteen grandchildren, and over twenty great- and great-great grandchildren. She is survived by all of them. Mom was our anchor. BY FAR, HER GREATEST LOVE WAS HER FAMILY. Robert and Betty Ann Sullivan and their children Jennifer and Michael McFadden; Tara and Joshua Larrimore and their daughters Artea and Pene. James and Mary Ellen Sullivan and their children Cathryn and Mark Merideth and their children Olivia, Hannah, and Luke; Christopher and Laura Sullivan and their daughter Layla; Timothy and Cassidy Sullivan. William and Sarah Sullivan and their blended families: Yolanda and Scott Renfro and their children and grandchildren; Anathea and Rick Canepa; Judy and Jess Materne and their children and grandchildren; Ron and Heidi Kirk and their children and grandchildren. Susan Wolfram and her daughter Christina. John and Margie Sullivan and their children Elizabeth and Steve Portelance; Carrie Haynes and her son Oliver. Charles and Karen Sullivan and their son Stephan and his daughters Ariana, Amiela, and Ava. George and Francoise Sullivan and their children Matthieu and Mona Sullivan, Geoffrey Sullivan, and Claire Sullivan. Carolyn and Ron Suydam. Margaret and Todd Golla and their daughter Rachel. Barbara passed away on Saturday, June 12, 2021 at the age of 99 with several of her children present.

Marie Barbara Sullivan, nee Dischinger, was born on October 16,1921 in St. Louis, Missouri. Her parents were Carl Frederic and Marie Barbara Dischinger. Her younger sister, Betty Jeanne, and her parents preceded her in death. She was a Roman... View Obituary & Service Information

The family of Marie Barbara Sullivan created this Life Tributes page to make it easy to share your memories.