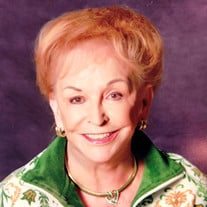 Marion Gotwals passed away peacefully in her sleep on July 31st just 2 months shy of her 100th birthday. She was born on October 2, 1920 in Fort Worth, Texas to Don and Rose Miller who gave her the nickname "Snookie". She spent her youth shuttling between Hollywood, California and Fort Worth attending school in both locations. While a student at Texas Christian University she met and married Virgil Cloer. They then moved to West Texas where her twin daughters Christney and Courtney were born. Not suited for the life and wife of a West Texas oil man, she returned to Ft Worth where she worked for American Airlines for many years. One of her most vivid memories was welcoming home POW's from the war against Japan. Owed a month's holiday, in 1946 she made her first of many trips to Europe and witnessed firsthand the destruction from the war. While working for the airline she met and married Thomas Bevan a geophysicist in 1953. They honeymooned in Havana, Cuba and nine months later Stacia, their daughter was born. They moved to Tulsa where she created a lovely home in Maple Ridge for her family which now included David, her only son. Extremely active socially she soon became an icon of Tulsa's cultural scene becoming President of the Tulsa Philharmonic Women's Association, a board member of the Tulsa Ballet and President of the Maple Ridge Association where she successfully prevented the construction of a highway through that historic neighborhood. She was an early and active member of All Souls Unitarian Church for many years whose philosophy and outlook on life she wholeheartedly embraced. Her children grown, she found the love of her life, prominent Tulsa attorney Charles P. Gotwals and they embarked on an idyllic lifestyle of travel and companionship. The marriage lasted nearly 30 years until Charles' passing in 2009. In the last 10 years of her life she once again took up her love of painting, producing nearly 40 works of art. She kept her sense of humor, passion for life and lightheartedness until the end. All who knew her will never forget her. She will be sadly missed. She is survived by her children, Christney, Stacia and David. Her step-children Carl Bevan, Sam Bevan, James Gotwals and Annie Walton and "Cooch" Gotwals. As well as two grandchildren, Teresa and Bill McGlashan and five great-grandchildren, Cody, Keldon, George, Robbie and Grace. A service will be held at Memorial Park Cemetery at 10 o'clock on Saturday, August 8th.

Marion Gotwals passed away peacefully in her sleep on July 31st just 2 months shy of her 100th birthday. She was born on October 2, 1920 in Fort Worth, Texas to Don and Rose Miller who gave her the nickname "Snookie". She spent her youth shuttling... View Obituary & Service Information

The family of Marion Miller Gotwals created this Life Tributes page to make it easy to share your memories.

Marion Gotwals passed away peacefully in her sleep on July 31st...

Send flowers to the Gotwals family.