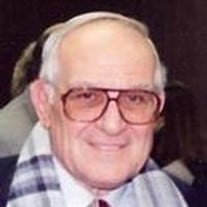 FILOSA, Marvin, a Tulsa, Oklahoma resident since 1972, passed away on December 1, 2009 after a long illness. He spent his last few months at The Arbors Senior Residence in Tulsa, Oklahoma where he was well cared for. He was born December 26, 1924 in Arma, Kansas to Edith and Basil Filosa who preceded him in death. He was one of seven children, six of which survive him: Marie Filosa, his older sister, who resides in New Mexico; Lawrence Filosa of Arizona and Missouri; Anthony Filosa of New Mexico; Kenneth Filosa of Connecticut and Wayne Pat Filosa of Illinois. He had a brother, Frank Joseph who died at birth. Virtually all of his extended family had visited him during his last illness. Marvin Filosa married his high school sweetheart, Betty Filosa. They were married for over 60 years until her death on April 13, 2003. Marvin and Betty had one son, Jim Filosa, of Tulsa, Oklahoma who married Shannon (Doohan) Filosa of Kansas City, Missouri in 1982. Jim and Shannon had two children, Michael Patrick Filosa and Emily Kathleen Filosa. Michael and Emily were the apple of Marvin’s eye, as his only grandchildren. Marvin Filosa is also survived by his sister-in-law, Haroldean (Guderson) Bohine of Arma, Kansas, his brother-in-law, Bill Anderson and his wife Genevieve of Pittsburg, Kansas, and their sons. Marvin Filosa was a graduate of Arma High School in Arma, Kansas and worked for the Fadler Company in Pittsburg, Kansas, Springfield, Missouri and Tulsa, Oklahoma for well over 50 years until retirement and his post retirement work. He rose from a warehouseman, truck driver, salesman and buyer to become the President and Chief Executive Officer of the Fadler Company. His tenure with Fadler was interrupted twice by his service in the Armed Forces during World War II and the Korean Conflict. He served in the United States Army Air Corps and Air Force. During World War II, he was stationed on the Island of Tinian in the South Pacific. Marvin Filosa was deeply saddened by the loss of his wife, Betty in 2003 and visited her grave daily during his healthful years. Marvin Filosa was a member of Saint Mary’s Catholic Church for 37 years and was devoted to his faith. Visitation will be held Friday, December 4, 2009 from 5:00 – 7:00pm followed by the Rosary at 7:00pm both at Fitzgerald Southwood Colonial Chapel, 3612 E. 91st St. A mass of Christian burial will be celebrated Saturday, December 5, 2009 at 10:00am at the Church of Saint Mary, 1347 E. 49th Place, Tulsa. Burial will follow at Calvary Cemetery at 91st and Harvard. Fitzgerald Southwood Colonial Chapel, 918-291-3500. www.southwoodcolonialchapel.com

FILOSA, Marvin, a Tulsa, Oklahoma resident since 1972, passed away on December 1, 2009 after a long illness. He spent his last few months at The Arbors Senior Residence in Tulsa, Oklahoma where he was well cared for. He was born December 26,... View Obituary & Service Information

The family of Marvin Filosa created this Life Tributes page to make it easy to share your memories.

Send flowers to the Filosa family.