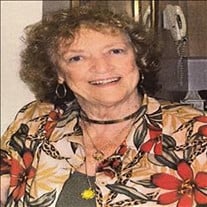 Mary Alice Collier was born October 7, 1932 to Dr. Carl Collier and Elizabeth Burkart Collier in McAlester, Oklahoma. She passed away on January 1, 2021 in Broken Arrow, OK. She is survived by her nieces, Jan Edwards(Perry), Mary Lenze (Brad), Karen Collier (John Callabro), Kathy Collier (Kelly Pope), Becky Collier, great-nephew Christopher Lenze, cousins, Carrie Hierath, Dr. Doug Almond and longtime friend, Mary O'Connor. Mary's voice was her talent. She had an "accent-less" voice and tone which lent itself to recording commercials, jingles, national campaign ads, educational teaching recordings as well as commercial writing. Mary was a DJ on several local radio stations including KQMJ Magic 99, KVOO, KXXO, KRAV-FM, including her "Mary in the Morning" show on KVOO. Previous to radio Mary was Continuity Director at KOTV-Channel 6 involving commercial writing and production manager. Lastly, Mary spent several years as Executive Director of Shanti, Tulsa. Mary attended from 60'- 62' Eastern Oklahoma State College, earning her Associates Science Degree. She also attended University of Oklahoma for the Radio/TV Journalism program. Finally getting her degree in Criminal Justice at the University of Oklahoma. She was a huge OU fan (BOOMER SOONER) and also enjoyed watching other sports. Mary joined the Catholic church later in her life. She was a devout Catholic while serving as a lector and eucharistic minister. She was also, a proud member of the women's ministry. She enjoyed her family and friends, especially her nieces when they were younger. And if there was fun or mischief to be had, she was usually the instigator! Mary was always ready to go waterskiing, snow skiing, play all sorts of board or marble games, and bridge. She was a talented singer and guitar player as well. Mary enjoyed going out to eat fine Italian food in Krebs, Oklahoma. Mary enjoyed traveling making trips to Hawaii, Italy, Ireland, Spain, Mexico and Australia. She and Mary O'Connor climbed to the top of the Sydney Harbour Bridge, and also worked as crew members for hot air ballooners for several years. Mary had a kind heart, was fair-minded (just leave political discussions aside) and an animal lover and protector all her life. She had a wonderful sense of humor and an enthusiasm for life which will be missed by all. Mary was preceded in death by her parents, Dr Carl & Elizabeth Collier, sisters, Elizabeth Clark and Rebecca Green, her twin brother Lt Col (RET), William (Bubby) Collier and brother Dr. Carl Collier. Viewing will be at 9:00 AM, rosary at 9:30 AM, with Celebration of Life Mass at 10:00AM, all at St Anne Catholic Church, Broken Arrow, OK. The Rosary and Mass will be streamed on Facebook at https://www.facebook.com/stanneba. Fitzgerald Southwood Colonial Chapel, Tulsa, OK

Mary Alice Collier was born October 7, 1932 to Dr. Carl Collier and Elizabeth Burkart Collier in McAlester, Oklahoma. She passed away on January 1, 2021 in Broken Arrow, OK. She is survived by her nieces, Jan Edwards(Perry), Mary Lenze... View Obituary & Service Information

The family of Mary Alice Collier created this Life Tributes page to make it easy to share your memories.

Send flowers to the Collier family.