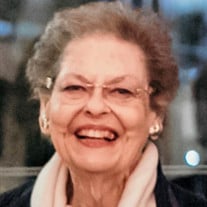 Mary Lou Dillingham, 81, passed away peacefully in her sleep the morning of April 6, at her home in Tulsa. She was born the daughter of J.B. and Aileen Marshall of Edmond, on May 18, 1940. Mary Lou attended school in Edmond and graduated from Edmond Memorial High School in 1958. She went on to attend Oklahoma State University, where she studied accounting. She was an active member of Kappa Alpha Theta sorority, and continued to remain active for many years thereafter, writing recommendations for prospective members. It was at the Chicken House Restaurant in Stillwater, which was owned and operated by her Aunt Catherine Marshall, where she would first meet her eventual husband, John L. Dillingham, of Bartlesville. After a year long courtship, Mary Lou and John married on September 5, 1959 at the First Baptist Church in Edmond. The couple lived in Stillwater, Kansas City, Birmingham, Shreveport, Atlanta and Charlotte, before finally moving back to Tulsa in 1978. Mary Lou embraced the role of full time homemaker, mother, grandmother, and loving wife for 63 years, raising four children: Jeri Ann, David, Mike, and Bryan. A true matriarch of the family, Mary Lou served as a harbinger of family events and ongoings, maintaining a constant involvement in the activities of her children and grandchildren. She considered her family as her greatest accomplishment. Mary Lou was an active member of the Baptist and Methodist Church. She and John were charter members of Faith United Methodist Church in south Tulsa, and later chartered and helped grow Abiding Harvest United Methodist Church in Broken Arrow, Oklahoma, where they continued to actively attend. Mary Lou had a heart for helping others, serving with John for many years at Restore Hope Ministries, and also served as president of their board of directors. Mary Lou volunteered in the college and career counseling office at Jenks High School, and later chaired the first Jenks Foundation Fundraiser Auction, and several others that followed. She was an avid bridge player, from her childhood all the way up to her passing, and enjoyed playing golf at Meadowbrook Country Club, where she and John were lifetime members. Mary Lou was a proud grandmother to thirteen: Cameron and Anna Carter, Amelia Saliba, John and Taylor Dillingham, Davis, Hayden, and Cole Dillingham, Chase, Zi, Brooke and Sarah Albert, and Trey Melton, with two great grandchildren both due this August. She is survived by her husband of 63 years, and her sister Ann Smith (Steve), daughter Jeri Saliba (Michael), her sons Mike (Michelle Matheny), Bryan (Candace), and daughter in law Lesley. She is also survived by her 13 grandchildren, plus numerous nieces and nephews. She is proceeded in death by her son David, whom she will be laid to rest next to at Calvary Cemetery in Tulsa. Words cannot express how much she will be missed by her family and friends. Visitation will be held at Fitzgerald Southwood Colonial Chapel on Sunday April 10, from 5-7 pm. Services will be held at Abiding Harvest Methodist Church on Monday April 11 at 10 am. Fitzgerald Funeral Service, 918-585-1151

Mary Lou Dillingham, 81, passed away peacefully in her sleep the morning of April 6, at her home in Tulsa. She was born the daughter of J.B. and Aileen Marshall of Edmond, on May 18, 1940. Mary Lou attended school in Edmond and graduated from... View Obituary & Service Information

The family of Mary Lou Dillingham created this Life Tributes page to make it easy to share your memories.

Mary Lou Dillingham, 81, passed away peacefully in her sleep...

Send flowers to the Dillingham family.