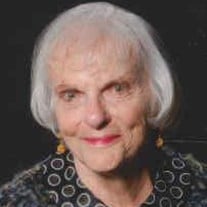 Mary Teresa "Molly" Rhoads, born October 31, 1928, to Irene Agnes and Francis X. McCauley, Jr. in Rome, New York, passed away July 22, 2021. After graduating from the University of Syracuse with a nursing degree she began her career and life of service at the Lenox Hill Hospital in Manhattan, New York attending to the likes of Mickey Mantle, Whitely Ford and Yogi Berra, to name a few. After returning to her hometown of Rome, she became Director of Surgical Nursing at Griffis Air Force Base where she met and married C. A. "Rusty" Rhoads in 1955. She and Rusty soon moved to Oklahoma, where Mary continued her nursing career, in Stillwater and Norman, as Head Nurse in the operating room. In 1967, she moved with her family to Tulsa joining the Church of the Madalene. Molly quickly became involved with her children's school activities as well as getting involved with church committees. Molly served in many offices and ultimately as president of the Madalene Women's Club. She was asked to help with RCIA as team member and sponsor. She served as Lector, Eucharistic Minister and St. Camillus Homebound Minister. She was a member of the Social Concerns committee for many years, preparing countless meals for the Homeless Shelter. One of her favorite committees she helped head was the Idabel Christmas project. One of her proud moments was knowing her grandchildren initiated an Easter Basket program for the children in shelters. Molly was recognized with the Woman of Achievement in 2007 by the Tulsa Diocesan Council of Catholic Women. After 25 years, Molly returned to nursing pioneered by St. John's Hospital returning-nursing program, earning a near perfect grade in the skilled refresher course. She worked at St John's Hospital in the Psychiatric ward for several years. She later took a job with Met Life, then moved into private nursing care until her retirement. Molly loved spending time with her family, friends and church. She is survived by her five children: Terry Van Zelfden (Dennis), Jeff Rhoads, II, Pamela Wofford (Dave), Alison Rhoads, and Sarah Martin (Chad); ten grandchildren, and four great-grandchildren. Friends may contribute to Glen Mary Missionary Father of Cincinnati, Ohio and Meals on Wheels. Rosary will be said Wednesday, July 28th, at 7 PM, and Mass of Christian Burial will be Thursday, July 29th, 11 AM, both at Church of the Madalene. Fitzgerald Ivy Chapel, 918-585-1151

Mary Teresa "Molly" Rhoads, born October 31, 1928, to Irene Agnes and Francis X. McCauley, Jr. in Rome, New York, passed away July 22, 2021. After graduating from the University of Syracuse with a nursing degree she began her career and life... View Obituary & Service Information

The family of Mary Teresa Rhoads created this Life Tributes page to make it easy to share your memories.

Send flowers to the Rhoads family.