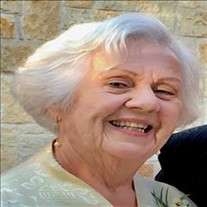 Mother of four, Grandmother of 5, devoted wife, Ball of Fire, Stirrer of the Pot (in the kitchen and otherwise), coach, friend, and self-proclaimed "Household Engineer." She loved people, tennis, plants, a good long chat or debate, and everything... View Obituary & Service Information

The family of Mary Jane Vitali created this Life Tributes page to make it easy to share your memories.

Mother of four, Grandmother of 5, devoted wife, Ball of Fire,...

Send flowers to the Vitali family.