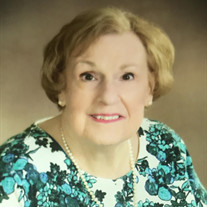 Maureen Anne (Dempster) Malarkey was born on December 26, 1948 in Darby, PA to James and Marie (McNeil) Dempster. She was baptized at St Cyril's Church in East Lansdowne, PA, grew up in Collingdale, PA and was a 1966 graduate of Archbishop Prendergast High School in Drexel Hill, PA, where student council and her sorority, Sigma Phi Mu, were sources of lifelong friendships. After graduation, she entered the novitiate of the Sisters, Servants of the Immaculate Heart of Mary in Malvern, PA, taking the religious name Sister James Eleanor. She exited religious formation after a year and worked as a secretary at the Philadelphia Electric Company. In 1973, she met William Malarkey, whom she married at Sts. Simon and Jude in Westtown, PA, on January 25, 1975. She and Bill made their home in West Chester, PA for the next 43 years, where they raised two sons. During that time, she was a mainstay at soccer games, Cub Scout meetings, and summer afternoons at Schlegel and Roslyn Swim Clubs in West Chester. She treasured time spent with her family, to whom she was a devoted and loyal wife, mother, sister, and aunt. She made lifelong friendships working in the Religious Education department at Sts. Peter and Paul in West Goshen, PA and as receptionist and assistant to the admissions director at Malvern Preparatory School, where she worked for 19 years and was affectionately known as "Mo" to her friends and colleagues. Fulfilling a lifelong dream, Maureen and Bill vacationed in Hawaii in 2000 and were fortunate to renew that dream by returning four more times. Maureen and Bill moved to Broken Arrow, OK in 2018 after being diagnosed with multiple myeloma to spend her remaining time closer to family and grandchildren; Maureen passed away at home on April 25, 2021. She is survived by her husband, William Malarkey; son James Malarkey and wife, Julie, of Harrison, OH; son Kevin Malarkey and wife, Marian, of Broken Arrow, OK; grandchildren Will, Emily Malarkey, Emma Claire, and John Paul Malarkey; sister Bonnie McLaughlin and husband, John, of West Chester, PA; sister Eleanora Layman and husband, James, of Coatesville, PA; sister Anne Marie Beck and husband, John, of Downingtown, PA; aunt Eleanora Nessel, of Exton, PA; and numerous nieces and nephews. Viewing and Rosary will be held at Fitzgerald Southwood Memorial Chapel, 3612 East 91st Street, Tulsa, on Sunday, May 2, 2021, at 7:00 PM. Mass of Christian Burial will be celebrated at 10:00 AM on Monday, May 3, 2021, at Christ the King Catholic Church in Tulsa, OK. Interment will follow at Calvary Cemetery. A memorial service will be held at Malvern Preparatory School this summer for friends and family unable to travel to Oklahoma. Friends may honor Maureen's memory with donations to Camilla Hall Convent Home and Healthcare Center of the Sisters, Servants of the Immaculate Heart of Mary, 100 Maxis Drive, Malvern, PA 19355 (or at www.camillahall.org ) or to the Lymphoma and Leukemia Society, PO Box 98018, Washington, DC 20090 (or at www.lls.org ). Fitzgerald Funeral Service, 918-585-1151

Maureen Anne (Dempster) Malarkey was born on December 26, 1948 in Darby, PA to James and Marie (McNeil) Dempster. She was baptized at St Cyril's Church in East Lansdowne, PA, grew up in Collingdale, PA and was a 1966 graduate of Archbishop Prendergast... View Obituary & Service Information

The family of Maureen Anne Malarkey created this Life Tributes page to make it easy to share your memories.

Send flowers to the Malarkey family.