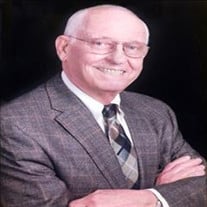 Maurice Eugene "Gene" Robinson died Wednesday, May 27, 2020. Gene was born July 14, 1927 in Bristow, OK. He was the middle child of Maurice A. Robinson and Florence Mary (Makoske) Robinson. Moving to Tulsa as a young child, Gene attended Marquette Catholic School and graduated Cascia Hall Preparatory School in 1945. He joined the U.S. Navy where he was humbled to be part of bringing our troops home at the end of WWII. After his Navy service he attended the University of Oklahoma where he earned a degree in finance. While at OU he was a proud member of the Sigma Chi Fraternity, from which he made many life long friends. While working summers in the oil fields of Oklahoma and Kansas he developed a love for oil and gas exploration. This led to a long career in petroleum land management for Skelly, Getty and Texaco, and allowed Gene to nurture his love of travel taking him to many cities throughout his career. A move to Jackson, MS introduced him to the love of his life, Milly Jane Wadlington. They were married September 7, 1963 in Atlanta, GA, and then resided in Calgary, Alberta, Canada where both of their daughters were born. In 1968 they returned to the States. Oil and gas transfers took the family to Midland, TX, Edmond, OK, and back to Tulsa, where he retired from Texaco in 1985. After retirement he continued to dabble in oil and gas independently until the end of his life. Gene and Milly had a passion for travel, loved the water and boating and any excuse to gather family and friends. As grandchildren came along he became known as "Pops" to both his grandchildren and their friends. He could always be found cheering them on at their sporting events and school activities. His love and support of family was unconditional. Gene was a founding member of The Church of Saint Mary, Tulsa, OK. A strong supporter of Catholic education and charities. Gene joyfully gave much of his time and talent to ensure children of all backgrounds received a strong faith based education. In 2008, the Robinson Brothers Leadership Award was established in honor of Gene and his late brother Jimmy. For more than a decade following, Gene played an integral part in the selection of deserving students for scholarship awards at his alma mater, Cascia Hall Preparatory School. Preceded in death by his bride of 43 years, Milly Jane Robinson, his sister, Mary Jo Booker and his brother James A. "Jimmy" Robinson. He is survived by his two daughters and their families. Celeste Robinson Cole and husband R. Michael Cole, and Milly Kimbrough Dunlap and husband David H. Dunlap, all of Tulsa; Grandchildren, Caleb McKenzie Cole and wife Bailey (Brook) Cole of St. Louis, MO; Hallie Cameron Cole; James Kimbrough Dunlap of Tulsa and many beloved nieces and nephews he loved like his own. Private family services are planned with a celebration of life to be held at a later date. True to Gene's heart, the family suggests memorials be made to The School of Saint Mary Education Endowment Fund, 1347 E. 49th Pl., Tulsa, OK 74105, or Friends of Catholic Education Endowment Trust, 1127 E. 33rd Pl, Tulsa, OK 74105 (focetulsa.org). A gentleman to the end and a man of deep faith, Gene has set an example of unconditional love that will forever be a road map for our lives.

The family of Maurice Eugene Robinson created this Life Tributes page to make it easy to share your memories.

Send flowers to the Robinson family.