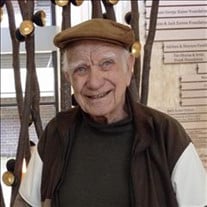 Mervin Dean Aptak passed away on Sunday, January 17, 2021, in Tulsa, Oklahoma. Mervin was born to Harry and Bertha Aptak on July 9, 1929, in Lansing, Michigan. His family moved to Tulsa where he grew up with his brother, Jack Aptak, of blessed memory, and he graduated from Tulsa Central High School in 1947. He attended college as a drama major before returning home to the family jewelry business. Mervin met his wife Betty on a blind date, and it was love at first sight. They would have celebrated their 67th anniversary in May. Mervin was so devoted to Betty and had promised that he would take care of her until she passed. He kept his promise and joined her peacefully 3 weeks later. Merv was a "people person" and everyone that knew him just loved his vibrant voice and upbeat personality. He was an avid tennis player, a realtor like no other, and the greatest friend you could ask for. He was that dad who never missed an event that involved his two daughters. He was involved with Temple Israel and brotherhood in his younger years, and volunteered at Zarrow Pointe long before he moved in. He had the nickname of "Mayor" of Zarrow Pointe and there wasn't a resident that didn't know Merv. He was known as "Poppy" to his Schreier family and "Grampy" to his Sorokin family, and the best role model for his two daughters, five grandchildren, and four great-grandchildren. Mervin is survived by his two daughters Lori Schreier (Randy) and Elisa Sorokin (Jorge), grandchildren Jason Schreier, Adam Schreier (Allie), Erin Bulcao (Nick), Jeffrey Sorokin (Annie), and Jordan Sorokin (Kendra) and great grandchildren Eliana, Natalia and Eriela Bulcao, and Arlo Schreier. The family sends their heartfelt appreciation to the loving, caring staff at Zarrow Pointe and for the support and love from family and friends. Donations in memory of Mervin can be made to Zarrow Pointe and Temple Israel of Tulsa. Click here for live broadcast on Zoom (Meeting ID 861 1692 2247) to the virtual graveside service officiated by Rabbi Michael Weinstein of Temple Israel that will be held on Thursday, January 21st at 11:00 A.M. Fitzgerald Ivy Chapel, 918-585-1151

Mervin Dean Aptak passed away on Sunday, January 17, 2021, in Tulsa, Oklahoma. Mervin was born to Harry and Bertha Aptak on July 9, 1929, in Lansing, Michigan. His family moved to Tulsa where he grew up with his brother, Jack Aptak, of blessed... View Obituary & Service Information

The family of Mervin Dean Aptak created this Life Tributes page to make it easy to share your memories.

Send flowers to the Aptak family.