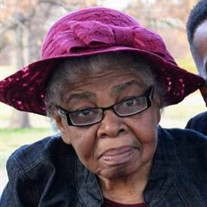 Pastor Muriel Dorothy George Sister George was born June 5, 1934, and went home to heaven on August 2, 2021, to join her wonderful husband whom she led to the Lord, Rev. Kenuate George. She grew up in Bridgetown, Saint Vincent and the Grenadines, where she finished grade school. At a young age, she found the Lord Jesus, and dedicated her life to Him. Sister George is known as one of the founders of the Church of God in Saint Vincent and the Grenadines. She spent her early years as an evangelist/preacher with Mother Priam and other women of God holding meetings throughout the entire country and preaching the gospel of Jesus Christ. She planted many churches and led thousands to the Lord. She and her husband were the founding pastors of the Beliar Church of God, along with several others. After Ken passed, she pioneered and pastored the Calder Church of God. Through her ministry throughout Saint Vincent and the Grenadines, many sons and daughters have been raised up for the kingdom of God. Those who knew Sister George knew her to be of a quiet spirit. She found joy and fulfillment in doing what the Lord told her to do: preach and teach the word. She was a meek but powerful woman. She had great influence but conducted herself with uncommon humility. If kindness was personified, it would look like this Woman of Eternal Excellence. Muriel was also an excellent homemaker, raising 4 children although her beloved husband Ken died soon after their last child was born. She taught her kids the word of God, doing her very best to lead them in the way they should go. In her latter years, Sister George was cared for by her youngest daughter Rosel's family in the state of Oklahoma. Muriel was preceded in death by her parents, her husband, her sisters, and her son, Andrew George. She is survived by her 3 daughters, Rosel, Luann, and Vashti, her son-in-law Livingstone, ten grandchildren, and five great-grandchildren. The funeral service will be held at 11am on Wednesday, August 11 at Faith Holiness Tabernacle in Claremore, Oklahoma. Interment will follow. Memorial Donations may be sent to FITZGERALD IVY CHAPEL, 918-585-1151. John 3:16 - "For God so loved the world that He gave His only begotten Son that whosoever believeth in Him shall not perish but have eternal life."

Pastor Muriel Dorothy George Sister George was born June 5, 1934, and went home to heaven on August 2, 2021, to join her wonderful husband whom she led to the Lord, Rev. Kenuate George. She grew up in Bridgetown, Saint Vincent and the... View Obituary & Service Information

The family of Muriel Dorothy George created this Life Tributes page to make it easy to share your memories.

Send flowers to the George family.