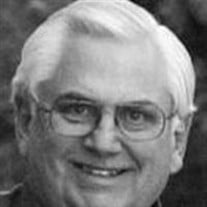 Dr. Nolan Leslie Gross, DVM, born on September 15, 1941, in Oklahoma City to V.L. “Tag” Gross and AnnaBelle Hull Gross died December 4, 2009, after a short and courageous battle with cancer. He graduated from Moore High School in 1959, where he was active in the FFA, showing sheep and pigs, and also lettered in track and field. Then he attended Oklahoma State University graduating with a Bachelor of Agriculture and later in 1966, as a Doctor of Veterinary Medicine. He remained an avid, loyal, and true OSU Cowboy sports fan his entire life. Nolan was also an avid fisherman, taking any chance he could to go fishing, especially enjoying fishing with his grandson, Cooper. He founded Mingo Road Veterinary Hospital in 1968, after serving as a Captain in the United States Army. Later, along with his loving wife Ginger, he founded and was President of Southern Agriculture animal supply centers with 7 stores in Northeastern Oklahoma. Nolan served on the Oklahoma Board of Veterinary Medical Examiners for many years and was a past president of the Tulsa County Veterinary Medical Association. He is a member of the Oklahoma Veterinary Medical Association and the American Veterinary Medical Association. He married his surviving wife Ginger at Boston Avenue Methodist Church in 1966, where he is still a member. He is also survived by son, Tag Gross and wife Cassie, daughter, Leslie Hicks and husband Robbie, five grandchildren Cooper Gross, Hagan Gross, Maggie Hicks, Boone Hicks, and Kate Hicks, all of whom he loved dearly. Also survived by his loving mother, AnnaBelle Gross, his brothers, Joe Gross of Tulsa, Mark Gross of Moore, and sister Sherry Adair of Bamberg, Germany, Brother-in-law Jim Hagan and wife Brenda of Edmond, and many cousins, nieces and nephews. The family wants to thank St. Francis Hospice, Dr. Randall Raine, Dr. Craig Johnson and Dr. Alan Keller for the wonderful and loving care throughout this journey. Thanks also to Nolan’s fellow veterinarians and the entire staff of Southern Agriculture, our extended family, who have been so supportive throughout his illness. Services will be held Tuesday, December 8th, 10 am at Boston Avenue Methodist Church. The family request in lieu of flowers that donations be made to either Boston Avenue Methodist Church or Oklahoma State University School of Veterinary Medicine.

The family of Nolan Leslie Gross created this Life Tributes page to make it easy to share your memories.

Send flowers to the Gross family.