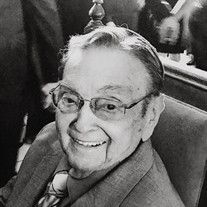 Norman G. Levin peacefully passed away Tuesday, December 22 in his room with his wife, Shirley, by his side, at Zarrow Pointe in Tulsa, Oklahoma. Norm was born in Dallas, Texas to Gertie and Agar Levin December 17, 1924. He lived in Dallas for the first eighteen years of his life and attended SMU until joining the Air Transport Command Division of the U.S. Air Force based in Tulsa in 1944. There, he met the love of his life, Shirley Haas, at a dance for service men stationed in the Tulsa area. Their first date was going to the Delman Theater to see "Yankee Doodle Dandy" and, from then on, they were a twosome. Norm got his orders to ship over-seas the day FDR died, April 12, 1945 and spent the next twelve plus months at Clark AF Base in Manila, Philippine Islands. After Norm's discharge from the Air Force, he settled in Tulsa working for Tulsa Iron and Metal Co. Two months later, Shirley came from the University of Texas; they got engaged and married June 30, 1946. Eventually, Norm left Tulsa Iron and Metal and joined the staff of Producers Oil, a job he enjoyed for 33 years. Norm taught 7th & 8th grade Sunday School at B'nai Emunah Synagogue for many years, was director of B'nai Emunah's Youth Congregation, and participated in the cast of multiple musical plays written and parodied by his wife, Shirley. Norman had a beautiful singing voice which he used to entertain, chant religious services at the Synagogue and at Zarrow Pointe, and to perform at many weddings and Bar Mitzvahs over the years. He enjoyed watching and playing tennis for many years with friends and strangers alike. Norman had 5 passions: his family, his faith, his love of music and singing, he enjoyed all kinds of people and let us not forget his love of OU Football. He especially loved singing to Shirley until he was 95 years old. Norman loved discussions with people much younger than he was. He was interested in their opinions and never missed a chance to share his own. Young people kept him young and he and Shirley shared that passion. His number one was his family. This was the most important thing in his life and if you met Norman, you left him knowing the names of his kids, where they lived and what they did. He is predeceased by his parents, Gertie and Agar, his brother, Sol, his son, Randy and his son-in-law, Lance Dubois Norm is survived by his beloved wife and best friend, Shirley Haas Levin, his daughter Linda Levin Dubois of Tulsa, his daughter Debbie Levin Jardot (Leo) of McLean, VA, daughter-in-law Susie Lerner Levin of Northbrook, IL, Grandchildren Elissa Levin, Nicole Dubois Hitchcock (Mitchell), Michael Dubois (Leah), Amy Levin Anshell (Adam), Benjamin Jardot (Sarah Moses) and Maggie Jardot. Also, 6 beloved great-grandchildren, 2 nieces and many cousins. The family would like to thank the loving staff at Zarrow Pointe, Miller Hospice and the outpouring of love and support of friends, extended family and clergy. In lieu of flowers, donations in Norm's memory can be made to Congregation B'nai Emunah, Zarrow Pointe, or Tulsa B'nai B'rith Youth Organization (BBYO) c/o Tulsa Jewish Federation. Private Family Services will be Monday, December 28. Fitzgerald Ivy Chapel, 918-585-1151

Norman G. Levin peacefully passed away Tuesday, December 22 in his room with his wife, Shirley, by his side, at Zarrow Pointe in Tulsa, Oklahoma. Norm was born in Dallas, Texas to Gertie and Agar Levin December 17, 1924. He lived in Dallas... View Obituary & Service Information

The family of Norman Gordon Levin created this Life Tributes page to make it easy to share your memories.