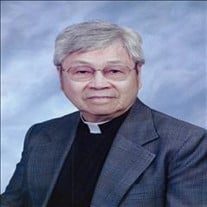 "What, who, how and where I am today, are purely the outcome of God's abundant goodness and grace. That's what my name stands for in Hokkien � Oon means grace, and Chor means help. I have been helped all of my life by God's abundant grace towards me" The Reverend Doctor Oon Chor Khoo was called home on April 21, 2021. He was born in Penang, Malaysia, the eighth child of Khoo Cheng Hoe and Kwan Chin Poh. Oon Chor was a creative, curious, and studious child and these traits continued throughout his life. He married Pearl Peck Lim Tay in 1958. He was her devoted husband for sixty two years. They were inseparable as the Lord led them to many parts of the globe. Oon Chor and Pearl did not have any children, but their home was often filled with guests. Oon Chor was a creative cook and hosted many dinners for his Tuesday prayer group over the last 19 years. Among his favorite dishes to prepare were Beef Rendang and Curry Chicken. Always together, even in the kitchen, Pearl was in charge of clean up. Oon Chor was committed to everything he undertook. He had a heart of a servant and was always willing to help wherever there was a need. This led him to many different positions in libraries and in music ministries throughout his career. As he neared retirement from ORU, he was ordained as a Deacon and then Priest in the Episcopal Church. Some of his most memorable mission trips were with his dear friend Bishop Cox. Even with Covid lockdown restrictions and his own failing health, he took time to minister to the staff and patients at Zarrow Pointe. As his brother and sister prayed, he uttered his last words "Abba Father! Hallelujah! Amen." He passed away with Bishop Cox by his side as Pearl sang praises. Dates: Born: January 29, 1931 Married: December 27, 1958 Deacon: 1986 Priesthood: 1988 Died: April 21, 2021 The family of Oon Chor Khoo Brother Oon Soo and his wife Siew Lan Khoo (deceased) Nephew Paul and his wife Linda of Sydney Australia Niece Grace and her partner Henri of New York Brother Oon Teik and Adeline (deceased) Nephew Christopher and his wife Naomi of the United Kingdom Nephew Wilfred (deceased) Nephew Walter (deceased) and his wife Lay Kian of Singapore Nephew Arnold and his wife Catherine of Singapore Brother Oon Jin (deceased) Nephew Anthony of the United Kingdom Nephew David and his wife Hilary of the United Kingdom Niece Helen (deceased) and her husband Russell of Cypress Nephew Stephen and his wife Heather of the United Kingdom Brother Oon Lock and his wife Chooi Beng (deceased) Niece Lorna of Singapore Brother Oon Hoe and his wife Maude (deceased) Nephew Keith and his wife Denise of Tulsa, OK Nephew Lester of Cleveland, MS Sister Grace Oon Bee Hsu of Tulsa, OK Brother Oon Theam of Singapore and his wife Maisie (deceased) Grand nieces and nephews 22 Great grand nieces and nephews 14

"What, who, how and where I am today, are purely the outcome of God's abundant goodness and grace. That's what my name stands for in Hokkien &#65533; Oon means grace, and Chor means help. I have been helped all of my life by God's abundant... View Obituary & Service Information

The family of Oon Chor Khoo created this Life Tributes page to make it easy to share your memories.

&quot;What, who, how and where I am today, are purely the outcome...

Send flowers to the Khoo family.