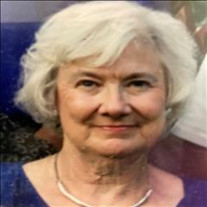 Patricia Claire Johnson was born on August 13, 1933 and returned to her heavenly home on January 28, 2022. She was 88 years old. Born to LaVerne and Firman Coyle, in Huron South Dakota. Patty grew up in Hot Springs, South Dakota where she married Mervyn Wallace Johnson. They lived in Oregon while he completed optometry school. They moved first to Idabel, Okahoma and then to Tulsa, Oklahoma for his successful optometry practice, Brookside Vision Center, which was a Brookside fixture for decades. Patty and Merv had six children and were active at St. Pius Catholic Church. They were married for 37 years until his passing in 1991. Some years later, Patty moved back to Hot Springs, South Dakota to be closer to her sisters. She ran into her old high school flame, Jim Lovell. Then for the next two decades she lived in Hot Springs, South Dakota where they enjoyed bowling, playing bridge, and socializing. Jim passed away in 2019. Patty then returned to Oklahoma to be near her children. She enjoyed family gatherings, Holiday celebrations and loved watching sports on TV. She was most passionate about her six (6) children, eighteen (18) grandchildren, and eleven (11) great-grandchildren, listed here: - Mervyn II, his wife Kelly and their children Mervyn III, Christopher and Wryan. - Jay, his wife Adair and their children Keith and Kevin. Kevin's wife Lauren and son Lincoln. - Craig and his children Garret; Allie; Lucy; Amanda, her husband Cody and their children Nora, Lydia and Chloe; Kristen, her husband Adam and their children Hawkins, Cole and Parker; and Maggie, her wife Sarah and their son Nico. - Leanna, her children Tyler and Regan. Tyler's son Ezekial. Regan's children Cory and Cooper. - Wroyce, and his children Evynn, Ellis and Weston. - Carolyn, her husband Bobby and their children Bradleigh and Adelaide. Patty is also survived by her siblings Joan, Connie, Jerry and Pam. Mass will be held at Calvary Chapel, located on the beautiful grounds of Calvary Cemetery, at 11 a.m., Wednesday, February 2nd. She will be laid to rest with her beloved husband Mervyn.

Patricia Claire Johnson was born on August 13, 1933 and returned to her heavenly home on January 28, 2022. She was 88 years old. Born to LaVerne and Firman Coyle, in Huron South Dakota. Patty grew up in Hot Springs, South Dakota where she married... View Obituary & Service Information

The family of Patricia Claire Johnson created this Life Tributes page to make it easy to share your memories.

Patricia Claire Johnson was born on August 13, 1933 and returned...

Send flowers to the Johnson family.