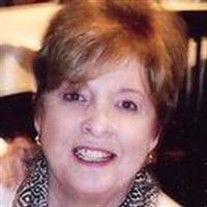 LINIHAN, Patsy R. Knight, 74, passed away Sunday, August 2, 2009. She was born September 9, 1934 to Cecil L. and Edna (Scott) Knight in Dallas, TX. She was a graduate of Central High School and St. John’s Nursing School. As an R.N., she worked in many areas of nursing and was one of the first six nurses to assist in open heart surgery in Tulsa, Of all her nursing endeavors, she considered her time as a hospice nurse to be the most rewarding. Upon retirement, she enjoyed traveling, showing her German Shepherd, and searching for the perfect lunch with her girlfriends. She touched so many lives and will be remembered for her unending generosity, contagious laughter and heart of gold. She found the good in everyone and was always quick to praise. She taught those around her the art of giving, the importance of accepting, and the act of selflessness. Pat’s presence made this world a better place. She is survived by; her husband of forty one years, George F. Linihan, Jr.; daughter, Julie (Cliff) Sheppard and grandchildren, Cassidy and Owen Sheppard of Sonoma, CA, and sister-in-law Ruth (Ray) Farrell of Tulsa. She is preceded in death by her parents, her son, George F. Linihan III, and step-father Hugh Anderson. Her family would like to thank St. Francis Hospice and her caregivers who provided outstanding care, comfort and support during Pat’s final months. In lieu of flowers, memorial contributions may be made to St. Francis Hospice, 660 S. Yale Ave., Suite 350, Tulsa, OK 74136, 494-6465. A visitation will be held at 6:00pm Wednesday, August 5, 2009 followed by a Rosary at 7:00pm both at Fitzgerald Southwood Colonial Chapel. A Funeral Mass will be held 10:00am Thursday, August 6, 2009 at St. Bernard of Clairvaux Church. A celebration of Pat’s life will follow at the Arnold Moore Family Center at Fitzgerald Southwood Colonial Chapel, 291-3500. www.southwoodcolonialchapel.com

The family of Patsy R. Knight Linihan created this Life Tributes page to make it easy to share your memories.