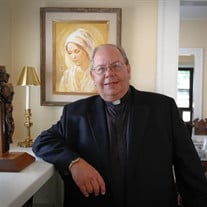 Rev. Paul E. Eichhoff (1945-2022) Fr. Paul Edwin Eichhoff died peacefully on June 3, 2022, after a brief illness at the age of 76. He was a retired priest of the Roman Catholic Diocese of Tulsa and Eastern Oklahoma. He is preceded in death by his parents, Louis Eichhoff and Anna (Butcher) Eichhoff, and his brother, Fr. Wm. (Bill) Eichhoff. He is survived by several cousins, his brother priests of the Diocese, and the laity and religious whom he served in the more than fifty years as a priest of Jesus Christ. Born in Oklahoma City on June 28, 1945, Fr. Eichoff attended Holy Rosary School at St. Francis of Assisi Parish. Discerning a vocation to the priesthood, he graduated from St. Mary's University in San Antonio, Texas, with a Bachelor of Arts in 1967. He then studied at the North American College in Rome, receiving a degree from the Gregorian University in 1969. He was ordained a priest on December 18, 1970. Fr. Eichhoff began his priestly service as the associate pastor at St. Peter and St. Paul Parish in Tulsa from 1971-1975. He was then the associate pastor at the Church of Saint Mary, also in Tulsa, from 1975-1978. In 1978 he was named pastor of St. Augustine and St. Jude Parishes in Tulsa. To meet the growing needs of the Catholic people in the Tulsa area, in 1980 he was given the responsibility to establish a new parish in Broken Arrow, the Church of Saint Benedict. The parish began with families gathering for Sunday Mass at the chapel of Our Lady of Sorrows Convent. Through the leadership of Fr. Eichhoff, the numbers of families quickly grew. He oversaw the construction of the current church building that is now located in south Broken Arrow. He served as pastor of St. Benedict until 1988. He then was pastor of the Church Saint of Mary in Tulsa from 1988-1995. From 1996-1997, he was the administrator of Holy Ghost Parish in Vinita and chaplain at the Northeast Correctional Center. His final parish assignment was at St. Cecelia Parish in Claremore from 1997-2015. At the time of his death, Fr. Eichhoff was living in retirement at Christ the King Parish in Tulsa, assisting with the sacramental needs of the parishioners. His numerous other ministry assignments over the course of his priesthood included being Chaplain at Bishop Kelley High School, member of the Presbyterial Council and College of Consultors, Master of Ceremonies for diocesan liturgies, Chair of the Priestly Life and Ministry Committee, Director of Clergy Continuing Education, Chair of the Priest Retirement Board, Chaplain to the Knights of Columbus, and Chaplain to St. Joseph Monastery in Tulsa. He will be remembered for his charitable heart, wisdom and joy. He experienced first hand the Cross of Christ. He also believed that through the Cross was the joy of the Resurrection and the hope of Heaven. Fr. Eichhoff's Wake Service will be on Thursday, June 9, at Holy Family Cathedral in Tulsa starting at 6:30pm. His Funeral Mass on Friday, June 10, at 10:00am, also at Holy Family. The burial will take place at Rose Hill Burial Park Cemetery in Oklahoma City at 2:30pm the same day. In lieu of flowers, donations in his name can be made to the Priest Retirement Fund of the Diocese of Tulsa and Eastern Oklahoma. Fitzgerald Ivy Chapel, 918-585-1151

Rev. Paul E. Eichhoff (1945-2022) Fr. Paul Edwin Eichhoff died peacefully on June 3, 2022, after a brief illness at the age of 76. He was a retired priest of the Roman Catholic Diocese of Tulsa and Eastern Oklahoma. He is preceded in death... View Obituary & Service Information

The family of Paul Edwin Eichhoff created this Life Tributes page to make it easy to share your memories.

Send flowers to the Eichhoff family.