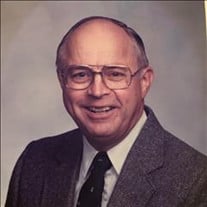 Paul Jerome Iten passed away peacefully on May 14, 2020, at his home in Broken Arrow, Oklahoma. He was born on February 24, 1933, in St. Peter, Minnesota, to Edward and Frances Iten. He was the fifth of six children. He was a 1951 graduate of LeSueur High School, and he studied at St. John's University in Collegeville before enlisting in the United States Army in 1953. After serving his country for two years, he completed his bachelor's degree in business administration at Regis University in Denver, Colorado. After graduation, he began working for Agrico (now Williams Company) in Tennessee, where he met Claudia ("my love"). They married in 1959. Paul continued to work for Agrico for the next 30 years, traveling to new locations and raising a family with Claudia. Their family, which by then included six children, planted their roots in Tulsa, Oklahoma, in 1972. After he retired, Paul dabbled in a variety of fields, including cattle ranching, house appraising, and working for the Catholic Diocese of Tulsa. He was a strong supporter of Catholic education, and he spent many hours volunteering for the schools of St. Pius X and Bishop Kelley, where his children and their children attended. Paul was a devoted father and loving husband. He was proud to have so many children, grandchildren, and great-grandchildren. He believed that home is "where you hang your hat" and enjoyed his many travels. He was an excellent baseball player with a wicked pitch. He was also an excellent teacher; he devoted many hours to teaching his children and their children many tricks, such as waterskiing, cane pole fishing, and betting on the ponies. And of course, he was always keen to go to his local casino with his family, especially if blackjack was involved. He is preceded in death by his parents as well as his brothers Jim (Ruth), Bill (Jean), and Tom (Donna). He is survived by Claudia; his sons; Chuck (Kay), Jerry, and Michael (Sandy); his daughters; Therese, Kathy (Steve), and Mary (Bryan); his brother Jack (Carol), and his sister Barbara (Art). He is further survived by his grandchildren and great-grandchildren, Michael (Reagan), David (Lindsey), Jennifer (David), Kimberly (Alex), Rachel, Stephen, Anna, Mary (Colin), Zack (Lesa), Katy, Emily, Matthew, Calista, Nicholas, Nathan, Kamber, Dax, Paisley, Kaylin, Jason, Luke, Logan, and Colton. Memorial Mass will be held on Saturday, July 25, 2020, at St. Benedict's Catholic Church in Broken Arrow, Oklahoma, at 11:00 AM. In lieu of flowers, please send donations to the St. Pius X School Library. Visit the following link to make a digital donation: https://spxtulsa.weshareonline.org/ws/opportunities/MemorialandHonorDonationsNOTMassIntentions In the comment box, please write "In Memory of Paul Iten for the St. Pius X School Library".

Paul Jerome Iten passed away peacefully on May 14, 2020, at his home in Broken Arrow, Oklahoma. He was born on February 24, 1933, in St. Peter, Minnesota, to Edward and Frances Iten. He was the fifth of six children. He was a 1951 graduate... View Obituary & Service Information

The family of Paul Jerome Iten created this Life Tributes page to make it easy to share your memories.

Send flowers to the Iten family.