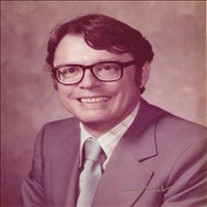 Loving husband, father, and son Paul Vincent McGivern Jr. passed away peacefully on June 12, 2022. Paul was born October 23, 1930 in Tulsa, OK the second child of Marguerite McGivern (nee Mangan) and Paul Vincent McGivern, Sr. In 1949, he graduated from Cascia Hall Preparatory School. After high school, he enlisted in the United States Air Force, serving at Johnston Island in the Pacific Ocean during the Korean War. Following his service, he continued his education at The University of Tulsa, graduating in 1957. He graduated from The University of Tulsa Law School in 1961, gaining admittance to the Oklahoma Bar the same year. He then built one of the most prestigious law firms in the state, focused on worker's compensation and insurance defense. As a passionate advocate for the law, he was a mentor to many young attorneys, including his daughter Karen and nephew Mike. Paul was preceded in death by his son Paul and his brother John. He is survived by his wife of 67 years, Louise McGivern (nee Morford), his two daughters Lynne and Karen, and his son Steve. He is also survived by his grandchildren Ryan, Adam, Andrew, Vince, Alex, Marlon, Timmy, John, Joe, Elidia, and Averie, who he loved dearly. In lieu of flowers, please make a donation in Paul's name to Catholic Charities or Family & Children's Services. A prayer service will be held at 3 PM Wednesday, June 15 at St. Rita's Chapel at Cascia Hall, and a funeral will be held 1:30 PM Thursday, June 16 at Church of the Resurrection, 4804 S Fulton Ave, Tulsa, OK 74135. Fitzgerald Ivy Chapel 918-585-1151

The family of Paul Vincent McGivern, Jr. created this Life Tributes page to make it easy to share your memories.

Send flowers to the McGivern family.