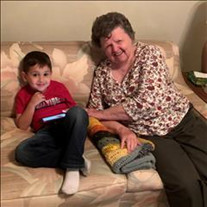 Peggy Siler, born, December 20, 1932 Peggy Lou Riggenbach to John and Lena (Diel) Riggenbach of rural Burlington, OK passed early January 2, 2022 in peaceful repose, at the age of 89. She lived in residence with her daughter, Lori Richcreek, and son-in-law David, in Bixby, OK. Peggy also leaves behind a son, Steven Siler, and daughter-in-law Pamela; sister-in-laws June Riggenbach and Ann Siler; five grandchildren: Joseph Heldmann, III, wife Brittany, Bradley Heldmann, M.D., Katherine Heldmann, Kayla Siler, and Dylan Siler; and 3 great-grand children: Joseph Heldmann, IV, Jackson Randall, Lona Renaye Heldmann and many nieces and nephews. Peggy grew up on the family farm with 1 sister, Fern and 2 brothers, Clifford and Cecil. She was the baby of the family, and was said to be a bit spoiled. She attended Burlington school all 12 years, played basketball, sang in glee club, and remembered stories of riding the bus, and having good friends she later shared reunions with in retirement. During her high school years, she lost her dad, John, after which her mom, Lena moved to Kiowa, KS. After graduating in 1950, President of her class, she went to work in Hartner, KS and lived in the nurse's dorm of Hartner Hospital. Following the Korean Conflict, Peggy's cousin (and matchmaker) asked her which Siler boy she would like him to send her way. Not knowing any of the 3 still at home, Ivan Diel, forementioned matchmaker sent Donnie. Mom loved taking pictures. Which is a delight to behold as we shared many memories including the first meeting of Donnie and Peggy, outside the door of Peggy's dorm! The two married in Cherokee, OK at First Christian Church on August 25, 1953. They moved to Stillwater, OK where Don attended OK A & M, (present day Oklahoma State University). Peggy worked at the cafeteria in Iba Hall, which was the home of the men's athletic dorm on campus. She got to bring home some fine food from the cafeteria, we were told. The two became a family creating homes in both Texas and Illinois. A favorite memory is of Peggy cooking fried chicken, mashed potatoes and gravy for Dad's week-end Friday night homecoming dinner. They lived a full and fun-filled 64 years together with a bond built on love and dedication to Jesus the Christ, serving family, church and supporting husband and kid's curricular activities positions included (but not limited to : ) ), Peggy was PTA President at Stonewall Jackson while Lori attended elementary school in Abilene, TX, (she was snazzy with her matching shoes, handbags and hats!) secretarial substitute for church office, and homemaker mentoring in Rock Island, IL. Peggy also assisted in Brownies, Cub and Girl scouts, was homeroom mother, cheered at football games, horseback riding events, and as Deaconess, preparing communion, Christian Women's Fellowship participating member everywhere they lived, from Abilene to the Quad Cities, and back to Cherokee, where they retired in the late 1980s. Peggy loved her family, and all who entered her door were considered a friend and welcomed. She will be missed for her quirky character and loving, listening heart. We rejoice knowing she has been reunited with Don and having a glorious reunion with those she has missed seeing in these years she's been apart. God Bless You and Yours for being a fellow sojourner carrying the good word to all you meet, like our beloved mother, grandmother, aunt, sister, wife and friend, Peggy Lou.

The family of Peggy Lou Siler created this Life Tributes page to make it easy to share your memories.

Send flowers to the Siler family.