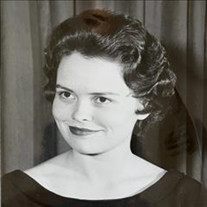 Penny Victor died peacefully in her sleep on Friday, October 29, 2021, after a short illness. Born April 29, 1939, she was the oldest daughter of Fred and Loretta Pence. After moving to Tulsa, she graduated from Monte Cassino High School in 1957 and attended St. Mary's College, Notre Dame IN. While in high school, she met the love of her life, Gary Miles Victor. They both immediately knew they were meant for each other and, following God's plan, they were married at Christ the King Catholic Church on March 11, 1961. During Gary's time in the United States Navy, they were stationed in Las Vegas, NV, Eleuthera of the Bahama Islands and Long Beach, CA. After Gary's discharge from the Navy, they lived in Albuquerque, NM before returning to Tulsa in 1975. Penny ran a successful Tupperware business in the 1970's and 1980's, making many lifelong friends along the way. A devout Catholic, Penny began working for Christ the King Church before becoming Marquette Catholic School's librarian, a position she held for 20 years. Five of her grandchildren attended Marquette during this time and she could be counted on for hugs and snacks. She touched the lives of countless children by sharing her love of reading and learning before she retired in 2004. Penny instilled a love of music and singing in her family. She sang in the Christ the King Choir for many years before joining St. Bernard's Church. Her work as the choir librarian at St. Bernard's kept the singers organized. A lifelong knitter, Penny knitted blankets, sweaters, hats and Christmas stockings for all her family. In her retirement Penny devoted many hours to knitting newborn baby caps through the Retired Senior Volunteer Program (RSVP). In 2018 she received the Presidential Lifetime Achievement Award for her many hours of dedicated service. Above all, Penny loved her family and close friends. She and Gary were wonderful parents and loved being Grandma and Poppy to their twelve grandchildren and Gigi and Poppy to their great-grandchildren. Penny was happiest when the family was together for family birthday parties and holidays, especially Christmas. Family gatherings were filled with great food, loud conversations and much laughter. Penny is preceded in death by her parents, her sisters Toni Pence and Tobie Bradley and her nephew Adam Zitel. She is survived by her husband Gary, her children and spouses; Marycarol and Jack Page, Chris and Sharon Victor, Craig and Carla Victor, Justin and Liz Victor, and Matthew and Sharla Victor; grandchildren, Erin Victor, Maggie Victor, Allison and husband Joe Flanders, Veronica Page, Catherine Page, Rachel Victor, Katherine Victor, Sophia Trotta, Cameron Victor, Cailin Victor, Carter Park, Mary Park and great-grandchildren Gemma Flanders and Teddy Flanders as well as siblings Victoria Clouse, Stephen Pence , Camille Higdon and Kimberly Pence. The family would like to thank the staffs of BrightStar and Zarrow Pointe for the loving care they provided during her last months. Viewing will be Thursday, November 4, 2:00-4:00 pm at Fitzgerald Southwood Colonial Chapel, Tulsa. Rosary will be Friday, November 5, 2021, at 7:00pm and Funeral Mass will be Saturday, November 6, 2:00 pm, both at St. Bernard of Clairvaux Catholic Church, Tulsa.

Penny Victor died peacefully in her sleep on Friday, October 29, 2021, after a short illness. Born April 29, 1939, she was the oldest daughter of Fred and Loretta Pence. After moving to Tulsa, she graduated from Monte Cassino High School in... View Obituary & Service Information

The family of Penny D. Victor created this Life Tributes page to make it easy to share your memories.

Penny Victor died peacefully in her sleep on Friday, October...

Send flowers to the Victor family.