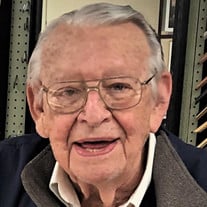 Philip Jay O'Meilia died at his home in Tulsa, Oklahoma, on January 26, 2022, at age 94. Son of William Edmund and Georgene (Laufersweiler) O'Meilia, he was born on July 17, 1927, at St. John Hospital in Tulsa. Jay grew up in Tulsa, attending Marquette School, Wilson Middle School and Central High School, graduating from Central in 1945. He enlisted in the Navy after graduation, eventually serving twice: 1945-46 and 1951-53. Between military stints, he attended the Art Students League in New York and the Chicago Academy of Fine Art. He also attended the Cape School of Art in Provincetown, Mass., George Washington University in Washington, DC, and the University of Tulsa. Jay was an accomplished painter, sculptor and printmaker, and a lifetime member of the American Watercolor Society. His work has been displayed in galleries and museums across America, including the Smithsonian Institution, the National Academy of Design in New York, and the National Cowboy & Western Heritage Museum in Oklahoma City. His sculptures, paintings, serigraphs, and prints are in the permanent collections of more than 500 private and corporate organizations worldwide. He was inducted into the Central High School Hall of Fame in 1990, and was a 1999 inductee into the Oklahoma Hall of Fame. Jay was a charter member of Philcrest Hills Tennis Club, playing regularly into his 90s. He was a die-hard fan of OU athletics and loved playing and watching all sports. From football to polo, baseball, golf and tennis, sports served as the subject for many of his finest works of art. Jay was also a dedicated, lifelong Catholic and a member of Christ the King Parish. Jay is survived by his older brother William, children Mark, Danny (Patty), Matt, Frannie (John) and grandchildren Andrew, Madeline, Ellie, Claire and Kate. He was preceded in death by his parents, his loving wife of 49 years, Jody (Brownlee), his daughter Meg O'Meilia, and brothers Raymond and Charles (Rolly). A rosary and remembrance of his life will be held at Fitzgerald's Ivy Chapel on Friday, February 4, at 5:30 p.m. Funeral services will be held on Saturday, February 5, 10:00 a.m., at Christ the King Parish, followed by a graveside ceremony at Calvary Cemetery. If you wish to watch the service remotely please use this link: https://youtu.be/XqyU7GAsW90 The family wishes to thank everyone for reaching out and sharing their condolences and stories of how Jay touched their lives in some way. In lieu of flowers, friends are asked to donate to Meals on Wheels, the Marquette School Adopt-A-Student Program, or the Tulsa Police Officers' Memorial Fund (tpdmemorial.com). Fitzgerald Ivy Chapel, 918-585-1151

Philip Jay O'Meilia died at his home in Tulsa, Oklahoma, on January 26, 2022, at age 94. Son of William Edmund and Georgene (Laufersweiler) O'Meilia, he was born on July 17, 1927, at St. John Hospital in Tulsa. Jay grew up in Tulsa, attending... View Obituary & Service Information

The family of Philip Jay O'Meilia created this Life Tributes page to make it easy to share your memories.

Philip Jay O&#39;Meilia died at his home in Tulsa, Oklahoma, on January...

Send flowers to the O'Meilia family.