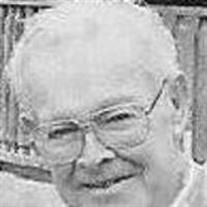 TIBEY - Phillip E., 87, passed away Easter Sunday morning,April 12th, 2009. Born in Cleveland, OK, Phil spent most of his boyhood growing up in Oklahoma City, graduating from John Carroll High School before enlisting in the U.S. Coastguard where he served in the Pacific during WW II. Phil married Mary Elizabeth Jones in October of 1948, at Christ the King Catholic Church in Tulsa and graduated from the University of Tulsa Law School in 1957. He worked as an attorney for Skelly and Getty Oil Companies until retiring in 1982. He and Mary gave many years in service to Neighbor for Neighbor and Meals On Wheels. He is sur- vived by: his sister, Lou Ann Williams of Florida; a son, Mark P. Tibey and his wife, Sandi of Broken Arrow; daughters, Lisa Mabrey King and her husband, Don of Tulsa and Debbie Tibey of Fallbrook, CA; grandchildren, Sean, Conor and Dylan Mabrey of Tulsa and Aimee, Ashley and Phillip M. Tibey of Broken Ar- row. Family will receive friends at Southwood Colonial Chapel, 91st between Harvard and Yale,on Wednesday from 5 to 7 p.m.,with a funeral mass at Resurrection Catholic Church at 4804 S. Fulton, Tulsa, on Thursday, April 16, 2009, at 10 a.m. Fitzgerald Southwood Colonial Chapel, 918-291-3500.

The family of Phillip E. Tibey created this Life Tributes page to make it easy to share your memories.

Send flowers to the Tibey family.