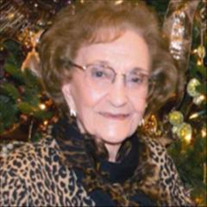 Phyllis Arnn Mullins, beloved Mother, Grandmother and Great Grandmother died at St. Francis Hospital in Tulsa on 6/18/21 after a serious fall in her home on 6/7/21. She was comforted by family and a former minister by her side. Phyllis was born in Oklahoma City to Virgil and Laura (Bostwick) McKinney, and grew up on their farm that is now part of the Wiley Post Airport near Bethany, OK. She graduated from Putnam City High School in 1937 and was always proud to say that she played basketball for the Putnam City Pirates. After High School, she attended Oklahoma City Hill's Business College where she studied bookkeeping and accounting. Phyllis worked for various companies following Business School and retired from Coates Field Service where husband, Ray R. Arnn was Chairman of the Board and CEO. They were avid OU sports fans, played lots of bridge and golf with their many friends, and volunteered with numerous local charities and organizations. Phyllis and Ray were longtime members of Northwest Christian Church in OKC where they both served as church elders. After Ray's sudden death in 1979 she married Leon A. Mullins in 1988. They had 30 wonderful years together and she became his loving caregiver the last 16 years following his stroke. They moved to Tulsa's Montereau Independent Living in 2008 where Leon passed away on 6/24/18. Phyllis continued to enjoy the lifestyle at Montereau and made many friends there until the end. Phyllis loved her family dearly. She was a wonderful friend to many, sharp to the end with a wicked sense of humor. She stayed active and social until her death and always remembered birthdays and special occasions for family and friends. Her faith was steadfast and she served as a role model for her grandchildren as they would always ask "What Would Grandma Do?" Phyllis was predeceased by her parents, two brothers, Erwin and Vernon, an infant grandson and the two great loves of her life, Ray and Leon. Phyllis is survived by her two adoring daughters Linda Hopkins (Johnnie) and Janet Ellsworth Gutman (Seth), a stepson, Gene Arnn, 5 grandchildren, Jennifer Hitchcock (Michael), Brent Hopkins, Angie Collier (Jeff), Todd Ellsworth, Eric Ellsworth (Whitney); and 8 Great Grandchildren, Cameron and Chelsea Hitchcock, Sam and Lucy Collier, Olivia, Holden, Luke and Reid Ellsworth; and friend, Wes Ellsworth. The family suggests that donations may be made to the Montereau Benevolent Fund in her memory. Viewing will be Wednesday, June 23 from 4-6 p.m. at Fitzgerald Southwood Colonial Chapel, Tulsa, OK. Service on Thursday, June 24, 1:00 P.M at OKC Memorial Park Cemetery Historical Chapel and graveside immediately following service. Fitzgerald Southwood Colonial Chapel, 918-291-3500.

Phyllis Arnn Mullins, beloved Mother, Grandmother and Great Grandmother died at St. Francis Hospital in Tulsa on 6/18/21 after a serious fall in her home on 6/7/21. She was comforted by family and a former minister by her side. Phyllis was... View Obituary & Service Information

The family of Phyllis Argus Mullins created this Life Tributes page to make it easy to share your memories.

Send flowers to the Mullins family.