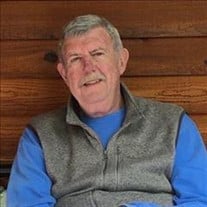 C. Raymond Patton, Jr., 69, passed away on June 17, 2020, after a brief struggle with cancer. Ray is survived by his wife of 46 years, Marilee Melius Patton, his sons, Michael and Mathew, his brother Jon, and beloved dogs, Millie and Gunner. Ray was born in Tulsa, Oklahoma on July 21, 1950 to C. Raymond and MaryLou Patton and grew up in West Tulsa with two brothers, Richard and Jon. Ray attended Riley elementary school and Madison junior high. He graduated from Central High School in 1968. Ray majored in finance at the University of Oklahoma and continued his education at OU law school, where he graduated in 1976. Ray put his finance degree to work by taking a part-time job at the Oklahoma Department of Securities while he was in law school. He accepted a full-time position upon graduation and advanced rapidly to become Director of Registration. Ray entered into private practice in Oklahoma City in 1978 but was called back into public service as the Administrator of the Department of Securities in 1984. As Administrator with a staff of 35 lawyers and accountants, Ray was responsible for securities regulation in Oklahoma, the regulation of stockbrokers and investment advisers and investor protection. In 1986, Ray left the Department to practice law in Tulsa. For the last 22 years, he was a shareholder at Conner & Winters practicing in the areas of securities and corporate law, mergers and acquisitions and corporate litigation, arbitration and mediation. For more than 10 years, Ray served as an adjunct professor at the University of Tulsa College of Law where he taught alternate dispute resolution, securities regulation and mergers and acquisitions. He also served as an adjunct settlement judge in federal court and as Chair of the Oklahoma Capitol Investment Board from 1988-91. He was recognized by his peers in the Best Lawyers publication, as a Superlawyer, and as a Lawyer of the Year for many years. Clients, colleagues and friends recognized his professionalism, loyalty, positive attitude and boundless sense of humor. Ray's professional achievements and many friendships paled in comparison to his love of family. He cherished Marilee; whom he described as his beautiful bride, a flower gardener extraordinaire and his soulmate. Ray also was very close to Marilee's extended family and developed a large circle of friends in her hometown of Faulkton, South Dakota from 35+ trips, many of which involved pheasant hunting with his sons. Michael and Matt, were always in Ray's spotlight. Ray would beam when he shared stories about the accomplishments and activities of his boys. For many years, Ray was involved in Ducks Unlimited and spent his free time near Ft. Gibson teaching the boys about hunting, fishing and enjoying the out-of-doors. A memorial in celebration of Ray's life is planned for Tuesday, July 21, 2020 at 2:00 at Fitzgerald Colonial Chapel, Southwood, 3612 E. 91st Street, Tulsa, Oklahoma 74137. A mask will be requested to be worn for anyone attending the service. A gift in memory of Ray may be made to Humane Society of Tulsa, 6232 E. 60th Street, Tulsa, OK 74135.

C. Raymond Patton, Jr., 69, passed away on June 17, 2020, after a brief struggle with cancer. Ray is survived by his wife of 46 years, Marilee Melius Patton, his sons, Michael and Mathew, his brother Jon, and beloved dogs, Millie and Gunner.... View Obituary & Service Information

The family of C. Raymond Patton, Jr. created this Life Tributes page to make it easy to share your memories.