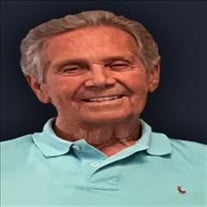 Richard Thomas Howl was born August 30, 1927 in Oklahoma City to William and Agnes Howl. He passed peacefully on December 31st from complications of Covid-19. He was one of 10 children, himself a twin. Richard attended St. Gregory High School. He joined the Navy during WWII and was stationed in the Philippine's. After returning, he attended Oklahoma State University and remained a loyal Cowboys fan. It's there that he met and married the love of his life, Marie Pannacci. After living in Oklahoma City and Enid, they settled in Tulsa for 60 years. He worked for Smith, Kline, and French as a pharmaceutical representative. Richard was a jack of all trades and always had some project going around the house. He was also accomplished painter and metal sculptor, receiving an award from Philbrook Art Center. Richard loved to fish, but his passion was for golf. You could always find him on the weekends playing golf and cracking jokes with his buddies. He had a funny sense of humor and you never knew if you were getting pranked. His kind heart and sense of humor brought love and friendships that lasted a lifetime. Richard was a devout Catholic and lifelong supporter of St. Pius Parish and Bishop Kelley High School. He lived his life as a Christian, always thinking of others. Family brought him the most joy. He worked hard and sacrificed to raise 5 children. He never missed an event that involved his children or grandchildren. He adored his dog Ben, who never left his side. Richard was a good man who will be at heaven's gate. Richard was preceded in death by parents William and Agnes Howl; brothers and sisters, John, Edwardine, Sister St. Jean; daughter Susan Howl. He is survived by his wife Marie Howl; brothers and sisters, Kate, David, Rita, Jeanette, Bill, Bob; children Michael Howl, Bob Howl, Kathy Brown, Elizabeth Schneider; grandchildren, Kristina, Robert, Carley, Angie, Mark , Kelley, Eric, Haley, Allissa, Zane and 8 great grandchildren. A Funeral Mass will be held at 1:00 p.m., on Wednesday, January 6, 2021 at St. Pius X Catholic Church, in Tulsa, Oklahoma. The Funeral Mass will also be live streamed at https://www.facebook.com/spxtulsa/

Richard Thomas Howl was born August 30, 1927 in Oklahoma City to William and Agnes Howl. He passed peacefully on December 31st from complications of Covid-19. He was one of 10 children, himself a twin. Richard attended St. Gregory High School.... View Obituary & Service Information

The family of Richard Howl created this Life Tributes page to make it easy to share your memories.

Send flowers to the Howl family.