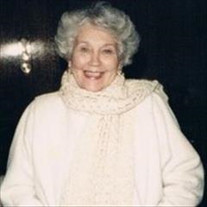 Rita Irene (Bryce) Burns, 94, died peacefully September 6, 2020. Born October 26, 1925, in Tulsa, Ok. She was the seventh of nine children born to Charles Moody and Irene (Brennan) Bryce. Rita was the last surviving sibling. After graduating from Marquette High School in 1943, she attended Oklahoma A&M, now Oklahoma State University, where she met Tom Burns. They fell in love and were married November 30, 1946, sharing 25 years and 10 children together. Rita celebrated life to the fullest and will be best remembered for her radiant smile, boisterous laughter and her never ending service to others. She loved her family, her faith, her many, many dear friends and her Irish and Cherokee heritage. Rita's chosen vocation was to be a faithful and loving Catholic wife and mother, and she did it well. While raising their children in the Catholic schools, Rita was very active in the Madalene Women's Club, holding many offices including being President. Perhaps most importantly, Rita was a good friend and she was always there to hold the hand of a friend or prepare a dinner to ease a difficult time. Despite her busy life, Rita was always involved in school activities. Fondly loving and remembering the times of being a den mother, and Girl Scout leader. Rita was very proud of her children and never missed an event and could be quickly found by the sound of her laughter and cheering them on from the sidelines. This dedication and love continued with her grandchildren and great-grandchildren's activities. Rita's life turned upside down when her husband died suddenly in March of 1972, leaving her to raise her children alone and start a career as a middle-aged single mother. Thankfully, God intervened. Pope Paul IV established the Diocese of Tulsa in February 1973 and Rita became the first employee. Rita served as Secretary of the Chancellor for most of her career, and became secretary to the Bishop before she retired at the age of 71. Besides her family, Rita's proudest achievement was her reputation as being a member of the Chancery Office and all the wonderful work they achieved and the life long friendships they built. Though she was middle aged when she began her career, she served with more energy and ambition than a person half her age, with the list of achievements to prove it. With her passion of art, she designed the logo for the Catholic Foundation of Eastern Oklahoma, and assisted with the logo for the Tulsa Diocese. She took on all the extra jobs and responsibilities because her employers knew she'd do them right and without complaint. She was proud to be known as one of the "Chancery Chicks", joyful and spiritual women who propelled the Diocese forward. Rita was a founding member of the Beginning Experience team in 1977, which evolved into an active program for widowed and divorced Catholics in 1985. As retirement was nearing, Rita quickly filled her new found freedom with her love and creativity in Art and Weaving. Rita was a member of the Tulsa Weavers Guild and created many beautiful pieces of Woven Art. Rita also began taking art lessons and was successful enough to compete in several oil and pastel art shows. She was very talented and quite prolific for many years, up into her 90's. As talented as she was with a canvas, she was even more gifted as a hostess and cook. Rita is famous for her homemade Cinnamon Rolls, bread, and Hot Cocoa. For 25 years, until March 17, 2019, Rita hosted an annual St. Patrick's Day Party, which began promptly after 8am Mass with her "St. Paddy's Day Special" of Irish Coffee and Scones. Preceding her in death were her parents; her husband, Tom Burns, their sons, Cary, Christopher (twins), and Joseph. Brothers, Charles Bryce, Dr. John Bryce, Walter Bryce, and Rev. Philip Bryce, her sisters, Mary Charles Bryce, OSB, Margaret Edwards, RoseAnn Bryce-Sanders, and Phyllis Brandt. Rita is survived by her children, Kay (Jim) Farrell, Thomas Kevin (Ursula) Burns, Phil (Jill) Burns, Mark Burns, Mary Burns, Pat (Connie) Burns, and Maggie (Ron Stanton) Burns, and 18 grandchildren and 22 great-grandchildren. A visitation for Rita will be held 3-5 p.m. Wednesday, September 16 at Fitzgerald Southwood Colonial Chapel. A Rosary will be held 7 p.m. Wednesday, September 16 at Church of the Madalene. The funeral mass will be held 11 a.m. Thursday, September 17 at Church of Saint Mary. A private Interment will follow at Calvary Cemetery. In lieu of flowers, donations may be made to St. Joseph's Monastery, 2200 S. Lewis Ave, Tulsa, OK. 74114; or Saint Francis of Assisi Tuition Assistance Trust, in care of the Tulsa Diocese.

The family of Rita Irene Burns created this Life Tributes page to make it easy to share your memories.

Send flowers to the Burns family.