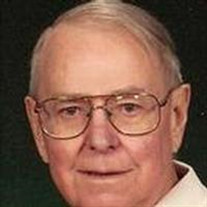 LEISE - Robert “Bob”, 77, passed away peacefully on Thursday, July 23, 2009. Bob was born September 8, 1931, in Hartington, NE, to August and Mary Leise. He attended Creighton University and graduated from Marquette University in 1954 with a degree in Civil Engineering. Following graduation, he served proudly in the U.S. Army as a 1st Lieutenant. Bob married his beloved wife, Helen Burroughs, on November 5, 1960, in Greeley, CO. He pursued a career in engineering and they started a family. In 1970, they moved to Tulsa where Bob was employed by HTB and Associates and was promoted to VP of Engineering. In 1991, Bob accepted the position of Deputy Director at the Port of Catoosa where he worked until he retired in 1996. He continued to provide engineering consulting services for the Port of Catoosa on a part-time basis until recently. Bob was a member of the Professional Engineering Association where he was awarded Engineer of the Year. He was also selected for The Arkansas River Historical Society's Hall of Fame for his important contributions to the Arkansas River Navigation System. He was a devout Catholic and a parishioner of Saint Bernard of Clairvaux where he attended Mass and served as Eucharistic Minister. Bob enjoyed playing golf, volunteering for Meals on Wheels with his wife, attending Oklahoma State University football games, and visits from his grandchildren. Bob had great devotion to his faith and family, and will be remembered for his compassion and generosity. Bob leaves his devoted wife, Helen, who loved him deeply in sickness and in health. He is survived by his 5 daughters, their spouses, and his 12 grandchildren: Sheryl Walseth (Greg) of Tulsa, OK; Sandra Stangeby (Pete) of Oak Hill, VA; Michelle Sheffield (Ed) of Plano, TX; Karen Payne (Ray) of Edmond, OK; and Rhonda Johnson (Chris) of Frisco, TX Bob is also survived by his brother, Richard Leise (Margaret) of Omaha, NE; his 2 sisters, Rita Ann Diebel of Aurora, CO and Marge Miller (Gerry) of Hartington, NE; and his sister-in-law, Wilma Jean Leise of Hartington, NE. He was preceded in death by his parents, August and Mary Leise; brother, Ronald Leise; and infant daughter, Glenda Mary Leise. A visitation will be held 5-7 p.m., Sunday, July 26, 2009, followed by a Rosary at 7 p.m., both at the funeral home. A Mass of Christian Burial will be held 10 a.m., Monday, July 27, 2009, at St. Bernard of Clairvaux Church. In lieu of flowers, donations may be made in his name to the American Heart Association or Meals on Wheels. Fitzgerald Southwood Colonial Chapel, 918-291-3500. www.southwoodcolonialchapel.com

The family of Robert J. "Bob" Leise created this Life Tributes page to make it easy to share your memories.