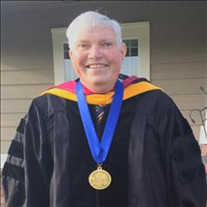 Robert E. "Bob" Howard, 73, of Tulsa, passed away on Sunday, July 18 due to complications from cancer. He is survived by Marilyn, his wife of 52 years. He is also survived by his brothers Vernon and Rick (Linda), his sons Matt (Rachel) and Zach (Bridgett), and his grandchildren Trent, Fred, Kolton, Carl, Elena, and Mason. He was preceded in death by his parents, Robert and Dorothy (Hendrickson). Bob was born in Tulsa on October 29th, 1947 and attended Central High School, where he met his future bride. They dated long-distance while he studied chemistry and physics at Cornell College in Iowa and then married in Tulsa in 1969. Bob earned a PhD in chemical physics from Indiana University in 1975. He completed post-doctoral research at IBM and UC Berkeley before becoming a Professor of Chemistry at the University of Texas Permian Basin from 1977-1981 and then a Professor of Chemistry at the University of Tulsa from 1982-2015. With an unmatched passion for physical chemistry and education, Bob mentored numerous students throughout his career. He will be remembered by many as their favorite professor, who brought Mr. Wizard-like antics and a sense of humor into the classroom. Committed to science education, Bob left a lasting impact on science education in Oklahoma through his summer teacher training workshops. In addition, he served as the chair of the chemistry department for ten years. Bob was extremely humble about his honors, which included outstanding teaching awards at TU, Oklahoma Chemist of the Year (2000), and induction into the Oklahoma Higher Education Hall of Fame (2012). Bob enjoyed spending time outdoors and pursued this in a variety of ways during different stages of his life, such as earning the Eagle Scout award through the Boy Scouts, taking in nature while running, camping at various national parks and forests, and maintaining the yard at his lake home. He was especially fond of lighting large bonfires (an extension of the chemistry lab?), and he passed the torch (pun intended) to his children and grandchildren. Bob always supplied a lighthearted atmosphere while hosting the annual picnic for TU chemistry students and faculty. Bob touched the lives of many, including his wife Marilyn, who is thankful for his love and support for over five decades. He was a constant source of guidance for his children, and he had many fun times with his grandchildren. In addition to family, there was also a special place in his heart for friends he made along the way, including those at TU and also his Central High School classmates. A visitation will be held on Thursday July 22nd at Sharp Chapel, 800 S. Tucker Dr., from 3-6pm. A memorial service will take place on Friday July 23rd at 1:00pm at All Souls Unitarian Church, 2952 S. Peoria. Attendance for the memorial service is limited to 150 people and pre-registration is required. Please pre-register at https://allsouls.me/bobhoward . To honor Bob, an endowed scholarship for TU chemistry students has been established in his name. Please make a gift by visiting . In the "Designation" drop down menu, select "other" and then type in the text box below, "Robert "Bob" E. Howard Memorial Endowed Scholarship" to continue Bob's support of chemistry education. Fitzgerald Ivy Chapel, 918-585-1151

Robert E. "Bob" Howard, 73, of Tulsa, passed away on Sunday, July 18 due to complications from cancer. He is survived by Marilyn, his wife of 52 years. He is also survived by his brothers Vernon and Rick (Linda), his sons Matt (Rachel) and Zach... View Obituary & Service Information

The family of Robert Ernest Howard created this Life Tributes page to make it easy to share your memories.

Send flowers to the Howard family.