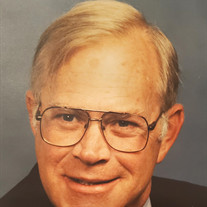 Bob was a Tulsa native, born on August 27, 1933, at St. John's Hospital in Tulsa and grew up in different oil towns in Texas and Kansas. He graduated from high school in Great Bend, Kansas and attended the University of Tulsa from 1951-1955 where he earned a BS in Chemical Engineering in 1955. He joined the First Church (the first time) in 1951. He went on to the University of Oklahoma where he earned his MS in Organic Chemistry in 1958 and a Ph.D. in Physical Chemistry in 1962. He was married to Felicia Berry Danuser (at First Church by Bryant Kirkland) in 1959. His career spanned 34 years with Conoco Oil in Ponca City and Oslo, Norway, where he retired in 1994. In that year he returned to Tulsa. Both He and Felicia had a great love for the arts. Season ticket holders to the Tulsa Opera and the Tulsa Symphony, they also loved going to Sante Fe and Albuquerque to shop for Southwestern Art, Pottery, and Kachinas, of which Bob had an extensive collection. In Norman, he was President of the Westminster Fellowship, the Presbyterian Student Association. In Ponca City he was elected deacon and served several terms on the Session of the Ponca City Presbyterian Church. In Oslo, he and Felica were active in the American Lutheran Church, where he served one year as the president of the congregation. If he was in a "good mood" he would allow Mormons, on their missions, into the house, where they usually had to go back to the MTC to be retrained, thus causing him to be blacklisted from any further "discussions" of Christ. Since retirement, Bob has served on the Board of Deacons and the Worship Committee at First Presby. He has taught numerous Sunday School classes and was active with volunteering with Meals on Wheels, Helping Hand Ministry, as well as other various organizations. He was also the first-ever male president of the St. Johns Volunteer Association. The last 20 years he was very active with Alcoholics Anonymous, all the way up to the state level. (Side note, Bob's great-grandfather fought at the Battle of New Orleans in 1812) Bob was preceded in death by both of his parents, Robert R. "Lefty" Matthews Sr. and Verlie Matthews, and his wife Felicia D. Matthews, He leaves behind his son Robert D. Matthews of Red Cliff, CO, and his brother James L. Matthews of Rio Rancho, New Mexico. Funeral Services will be at 1 PM, on Tuesday, November 9, at First Presbyterian Church in Tulsa, Oklahoma. Fitzgerald Ivy Chapel. 918-585-1151

Bob was a Tulsa native, born on August 27, 1933, at St. John's Hospital in Tulsa and grew up in different oil towns in Texas and Kansas. He graduated from high school in Great Bend, Kansas and attended the University of Tulsa from 1951-1955... View Obituary & Service Information

The family of Robert Ramage Matthews, Jr. created this Life Tributes page to make it easy to share your memories.

Send flowers to the Matthews family.