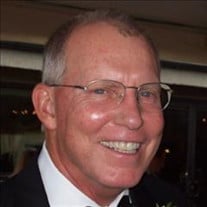 Robert Stewart Morgan (Bob) passed away peacefully with family at his side on March 22, 2022 at the age of 72. His life was centered around Faith, family, health, work and commitment. Born in Rockville Centre, NY on September 30, 1949 to William and Gemma (Stewart) Morgan, Bob spent his formative years in Amityville, NY. He graduated from Archbishop Malloy High School in Queens, NY where he traveled two hours each day on the Long Island Railroad. He furthered his education by earning a bachelor's degree in accounting from Villanova University in 1971. Bob was introduced to Tulsa during the summer between his sophomore and junior years in college when his father was transferred to Tulsa the previous year. He quickly fell in love with the city (no more trains!) despite his parent's transfer back to the East Coast. He settled in Tulsa after college and began his career with Touche-Ross (now Deloitte) in 1971. After nine years with the firm, he was promoted to Partner at the age of 30, giving him the recognition of being the youngest person to reach that level in the company's history. Just one year later, he became Audit Partner in Charge. He became Managing Partner of the Oklahoma Practice in 1994 and also Managing Partner in Little Rock where he traveled every other week for the final seven years of his career until his 41-year retirement in 2012. Bob will be remembered as a leader in the firm and a mentor to many young professionals. He adopted an early firm phrase of, "Be the Best." Bob met Janice, his wife of over 47 years in 1972, while living in the same apartment complex in Tulsa. They were married in Janice's hometown of Newkirk, OK, on August 31, 1974. He joked that the wedding had to be that day because August 31 was "bonus day" in the firm and it would ensure a great honeymoon to New Orleans! He was a devoted husband, proud father of Brad and Katie, and beloved PopPop/Pops to his five grandchildren creating a legacy of love centered around family. Bob and Janice have been long-time members of St. Bernard of Clairvaux Catholic Church and Southern Hills Country Club. Bob was involved in many community and non-profit organizations over his career and served as President of the Tulsa Ballet, the Petroleum Club and the Summit Club. He supported and was active with the Philbrook Museum, Salvation Army, Tulsa Area United Way, the Oklahoma Chapter of the American Diabetes Association, JDRF and many others. Bob was passionate about all sports, but his greatest passion was about his health and exercise. Diagnosed as a Type 1 diabetic at the age of 19, he became devoted to a healthy lifestyle and maintaining control of his diabetes. He was an avid runner and ran over five miles every morning, participating in the first 32 years of the Tulsa Run. After a morning run (or walk as age progressed), you could find him at the St. Francis Health Zone in the afternoon lifting weights or walking with friends. If you ever questioned his motives about anything, his response was always, "It's a Bob thing!" Bob was preceded in death by his parents; and his sister, Terry Vargas. Left to cherish his memory are his wife, Janice; son Brad and wife Elizabeth and their three daughters, Charlotte, Delaney and Wynn, of Charlotte, NC; daughter Katie Hermann and husband Karl and their two children Luke and Grace, also of Charlotte, NC; his brother Bill and wife Barbara of Fullerton, CA; and brothers and sisters-in-law, John Vargas of Raleigh, NC; Ken and Susan Horinek, and JR and Carolyn Kirkendall all of Newkirk, OK; and many nieces and nephews. A funeral Mass is scheduled for Friday, April 22, at 11:00 a.m. at St. Bernard of Clairvaux Catholic Church, 4001 East 101st Street, Tulsa. In lieu of flowers, the family invites you to make a donation in Bob's name to JDRF (formally the Juvenile Diabetes Research Foundation) using the following link https://www.jdrf.org/memorial

Robert Stewart Morgan (Bob) passed away peacefully with family at his side on March 22, 2022 at the age of 72. His life was centered around Faith, family, health, work and commitment. Born in Rockville Centre, NY on September 30, 1949 to William... View Obituary & Service Information

The family of Robert Stewart Morgan created this Life Tributes page to make it easy to share your memories.

Send flowers to the Morgan family.