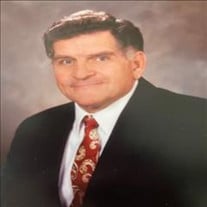 Robert Joseph Scholtz passed away peacefully October 9, 2021 in Tulsa, OK. Robert was born on Christmas Day 1937 in Watertown, South Dakota. The Scholtz family moved to Tulsa in 1946. Bob attended Tulsa Marquette School and was a faithful Alter Server at Christ the King church throughout his school age years. Early in life, Robert followed his Fathers aeronautical passion and made his first solo in an airplane at age 16. He continued to pilot for many years and made numerous flights from Tulsa to South Bend, IN. Bob was a great athlete and stellar at playing football. He was recruited by many colleges, however chose The University of Norte Dame for his education. He was the very first football player that Notre Dame allowed to pursue a Degree in Electrical Engineering, knowing that was extremely difficult and intellectually challenging. He graduated with such Degree June 1961. Upon graduating he was drafted in the 3rd Round, 27th overall to the Detroit Lions, where he played for 5 years. He went on to play for the New York Giants for 2 years. All the While proudly representing the United States Army as 1st Lieutenant. Robert received a "special pass" each weekend to play in the professional football league games. A career ending knee injury sidelined his football career just after signing with the New Orlean Saints. He began working at IBM and had a very successful career for 35 years. He retired early and travelled the world with his wife Barbara. Robert and Barbara met at Marquette High School in Tulsa, Ok. They were married at Christ the Church and celebrated 62 years of marriage together. They were High School Sweethearts and the Love of each other's lives. In addition to his lovely wife, Barbara, Robert is survived by his brothers and sisters, Richard and wife Nita, Janice, Mary and Donnie. Also survived by his children Robert II and Michelle. His oldest daughter Diana, preceding his death on May 5, 2021. Also survived by his grandchildren, Jacob, Logan, Ethan, Zachary and Christian. A Funeral Mass will be held at 1:00 PM on Wednesday, October 13, 2021 at Christ the King Catholic Church, followed by a committal service at Calvary Cemetery. Afterward, the family would like to invite those in attendance to a reception at the Fitzgerald Southwood Colonial Chapel Family Center.

The family of Robert Joseph Scholtz created this Life Tributes page to make it easy to share your memories.

Send flowers to the Scholtz family.