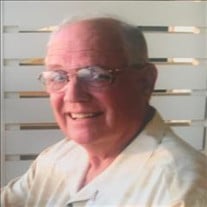 Robert Garland "Bob" Snead, Sr. 82, of Tulsa, died on Sunday, June 28, 2020. Bob was born on August 1, 1937, the son of Ray and Hazel (Young) Snead, in Amarillo, Texas. He grew up in the Amarillo area. He then pursued his bachelor's degree at Texas A&M University, and Texas Tech. He received his master's degree at Texas A&M in Oceanography and graduated with his Doctorate Degree from the University of Alberta in Canada in Geology/Geophysics. He worked as a Geologist until his retirement at the age of 80. On August 22nd, 1964 he married Emma Ruth "Ruthie" Bishop in College Station, Texas. They moved to Tulsa in 1979 and spent 55 happy years together as man and wife. They enjoyed many years at Grand Lake with their "Lake Family" throughout their marriage. Bob enjoyed: fishing, golf, BBQing, Socializing, Fish frys, and spending time with his 5 grandchildren. He is survived by his wife, Emma Ruth Snead, son- Robert G Snead Jr., daughter-in-law Jennifer Welborn, daughter- Sally Carlton, and grandchildren- Elaine, Erin, Dana, Audrey, Rick, and many nieces and nephews. He was preceded in death by his brothers, Joe and Ray Snead and his son-in-law Blake Carlton. In lieu of flowers, memorial donations may be made in Bob's name to MD Anderson Hospital or Boston Avenue United Methodist Church. Service will be held at Fitzgerald Southwood Colonial Chapel Private family burial. (Masks preferred)

The family of Robert Garland "Bob" Snead, Sr. created this Life Tributes page to make it easy to share your memories.

Send flowers to the Snead family.