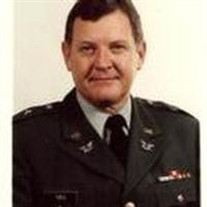 Tulsa Attorney Robert Harold Tips, Brigadier General, USA, Ret., died May 1, 2010. He was born Sept. 19,1935, in San Angelo, Texas, to Harold E. and Dorothy Mozelle Tips, who predeceased him. General Tips graduated from Will Rogers High School, attended the University of Oklahoma, graduating in 1960 with a BA and JD. He served as Brigadier General, Judge Advocate Generals Corps, US Army, and was awarded the Legion of Merit and Meritorious Service Medal. He retired from the Army Reserve as Assistant Judge Advocate General for Operations in 1988. He was named Assistant City Attorney for Tulsa in 1967, as Assistant City Prosecutor. He was Chief, Trial Division, City of Tulsa until 1973. He was in private practice at his death. He was a member of Delta Tau Delta Fraternity, A&A Order of Masons, Scottish Rite Masons, Shrine, and Royal Order of Jesters. He was a member of The Oklahoma Bar Association, former President of the Congregation, First Lutheran Church, Tulsa, and former President of the Tulsa Title and Probate Lawyers Association, and a member of The American Bar Association and Tulsa Bar Association. Bob was an Eagle Scout and received the Order Of The Arrow as well as being an early founding member of the Tulsa Bass Club. He is survived by his wife and best friend, Dorothy Ann Tips, his daughter Kristina Tips Leff ingwel[ and husband, Thomas, of Wallingford, CT, Sons, Eric R. Tips and wife Christina, Jonathan H. Tips and wife Jayme, and seven grandchildren, Julia and Thomas Leffingwell, Haven, Austin, Zachary, Emma, Abigail Tips and former wife Suzanne Tips. He enjoyed fishing, hunting, golf, woodturning and the study of History. in lieu of flowers the family requests contributions to the Akdar Shrine Transportation Fund, 2808 South Sheridan, Tulsa, Oklahoma 74129. This fund provides free transportation to children and their families to Shrine Hospitals. The family will receive friends from 5-7pm Tuesday, May 4. 2010 at Fitzgerald Southwood Colonial Chapel. Funeral Service will be held 1:00pm Wednesday, May 5, 2010 at Boston Avenue United Methodist Church. Fitzgerald Southwood Colonial Chapel, 918-291-3500. www.southwoodcolonialchapelcom

The family of Robert H. Tips created this Life Tributes page to make it easy to share your memories.

Send flowers to the Tips family.