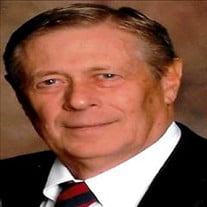 Roger Snavely, age 77, passed away on August 20, 2020 surrounded in love by his family and friends. Roger is survived by his wife Joanne; his son Thomas Snavely of Roseville, Minnesota and his wife Kate and grandchildren Johnathan and Samantha; his daughter Megan Clarke of Southlake, Texas and her husband Justin and grandchildren Jack, Alex and Henry. Roger is also survived by his brothers Joseph and Frank Kajder and their wives Karen and Marilynn. Roger was born in Cleveland, Ohio and was the son of Harry and Sarah Snavely. He attended Willoughby South High School where he participated in track and cross country and graduated from Ohio University. Roger met his wife of 55 years on the Ohio State campus on a blind date. He started his career in 1965 at US Steel and ended his long career in 2014 as the VP of Operations Midwest at Valmont Industries in Tulsa, Oklahoma. While at Valmont, Roger had the pleasure to work with a high achieving team that truly complimented and supported one another. Throughout his life and his career Roger believed in doing the right thing and encouraged his children and grandchildren to do so as well. Roger loved travelling with Joanne and especially enjoyed walking on the beach, catching crabs bare handed and playing cards with his grandchildren during family vacations on Fripp Island, South Carolina. He was an avid reader and had a special love of history. He was passionate about golfing, cooking, walking with Joanne and feeding the hummingbirds in his backyard garden. Education was especially important to Roger and he instilled in his children and grandchildren the value of always learning and improving themselves. The family asks for any memorial donations to go to the Saint Francis Hospice program. Please send checks payable to Saint Francis Hospice to 6600 South Yale Avenue, Suite 350 Tulsa, OK 74136 with Roger's name in the memo line. We are forever grateful for the kind and compassionate care he received from the Saint Francis Oncology and Hospice Teams. The care Roger received from the nurses and nurse technicians was exceptional. A funeral mass will be held at 11:00 am on Friday, August 28, 2020 at St. Bernard of Clairvaux at 4001 E. 101 St., Tulsa. The internment in his home state of Ohio will take place at a later date. Special thank you to Dr. Janjua, Rev. Msgr. Gaalaas and Father Thomas for giving Roger hope and a peaceful farewell. Also, thank you to Becky and Celia who were part of Roger's Wonder Woman caregiving squad and Dan and Rick for their continued love and support.

Roger Snavely, age 77, passed away on August 20, 2020 surrounded in love by his family and friends. Roger is survived by his wife Joanne; his son Thomas Snavely of Roseville, Minnesota and his wife Kate and grandchildren Johnathan and Samantha;... View Obituary & Service Information

The family of Roger Stephen Snavely created this Life Tributes page to make it easy to share your memories.

Send flowers to the Snavely family.