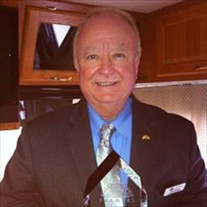 Ron was born on June 7, 1949 in Denver, Colorado, and he grew up in the farming communities of Greeley and Wiggins County in Colorado. His grandfather C.M. Roark started the original family farm. His Grandfather put him to work at an early age on the farm, where he worked all thru high school and college doing whatever was asked of him; and driving the combines he so dearly loved while enjoying the outdoors. Ron graduated from Wiggins High School in 1967 and continued his education at the University of Northern Colorado. Where in 1971 he graduated with a degree in Business Economics and a Certificate and Teaching Degree in Business Education. After college, Ron embarked on a new venture and started his career in insurance as he began working at Met Life, where he took his Grandfather's advice, and his "experience on the farm" to do whatever was asked of him to get the job done, and quickly excelled. It was at this venture in his life when he met Jim Hall, District Manager in Wyoming and was offered a new career with Farmers Insurance Group. His tenure with Farmers, began and lasted for a wonderous and wonderful, 43 years. During this time, Ron started his Military Career with the Wyoming Air National Guard, then transferred to the U.S. Army and then the U.S. Army Reserve, of which he served 25+ years when he retired at the Rank of Major. Ron loved the beautiful scenery of Wyoming and decided that he wanted to learn to fly, took lessons and achieved his private pilot's license while in Wyoming. As, it is a very big state this gave him the opportunity to more readily see clients giving him the opportunity to also enjoy the landscape and clouds from above. This enabled him to keep in contact and visit friends as well. Ron was transferred to Tulsa in 1985 with Farmers to become a District Manager in the Tulsa Area. He trained new agents for seven years in the Tulsa Area, many that are successful and here today at this service. In 1986, Ron met a vivacious, young blonde Texas gal through some mutual friends. She realized that his eyes were as crystal blue as the Texas skies and the two fell madly in love. Embarking on a life long journey of love, friendship, adventure and fun. Ron and Gerry were married under the beautiful Wyoming skies in 1988 in Jackson Hole Wyoming with the Teton Mountains as their backdrop. Gerry became his administrative assistant in 1988 as she became a licensed agent as well and "Team Roark" was born. Ron's passion for commercial and business insurance is what inspired him and drove him to be the success he was. His clients were "Family" to him and he helped them to grow, serving their needs as an insurance agent as well as a friend. Always on a "New Adventure", Ron and Gerry traveled the United States in their RV with their "Tribe" in tow. Attending many Motorcycle Rallies, Civil War Battlefields and National Parks along the way. Ron passed away on Thursday, April 21st, 2022 promptly at 1700 hours (5:00 P.M.), as his "work day" was done. He was surrounded by his companion in life, his beautiful Texas bride Gerry, his son Jeremiah and his three loving angels, Gretchen, Laquita and Rhonda. Ron is survived by his wife, Gerry of Tulsa, OK, son Jeremiah Ramey and Amanda Reid of Tulsa, OK, daughter Jennifer and husband Scott Morgan and their two sons of Overland Park, KS, and his loving "Tribe of Dogs" that he loved dearly, Stonewall Jackson, Rooster Cogburn, Rebel Rosie "Rosie", Annie Oakley, May Lillie, Adelaide "Addie" and Rebel, all of the home, and his beloved "Feathered Tribe" Tweetie, Peetie and Larry, his "Farmers Insurance Family", and a host of many beloved friends. A celebration of Ron's life will be held 2:00 pm Wednesday, May 4 at Fitzgerald Southwood Colonial Chapel. In lieu of flowers, please consider making donations in Ron's name to Oklahoma German Shepherd Rescue, https://oklahomagsr.org/ Tunnel to Towers Foundation, https://t2t.org/ or Wounded Warrior Project, https://www.woundedwarriorproject.org/donate

Ron was born on June 7, 1949 in Denver, Colorado, and he grew up in the farming communities of Greeley and Wiggins County in Colorado. His grandfather C.M. Roark started the original family farm. His Grandfather put him to work at an early... View Obituary & Service Information

The family of Ron Roark created this Life Tributes page to make it easy to share your memories.

Customized sympathy cards. Mailed for you.