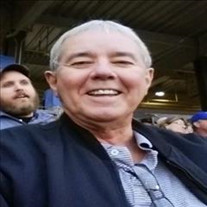 Ronald (Ron) Eugene Beal, 74-year-old resident of Tulsa, Oklahoma, spread his wings to heaven and passed away peacefully on March 8, 2022. He was born June 14, 1947, in Oswego, Kansas, to Albert LeRoy Beal and Marjorie Anne Lamm Beal. The family moved to Decatur, Arkansas where Ron spent his early years of life then graduated from Decatur High School in Decatur, Arkansas and then attended the University of Arkansas in Fayetteville, Arkansas before joining the Marine Corps. He began his service with the Marine Corps in San Diego, California at the Marine Corps Depot for boot camp. Following boot camp Ron was deployed and stationed in Da Nang Vietnam and served in the war with many good soldiers who were his friends. He completed his military grade as CPL E-4. Ron received the National Defense Medal, Vietnam Service Medal, Vietnam Campaign Medal, Good Conduct Medal, M-14 Expert Badge and Honorable Discharge while serving in the United States Marine Corps during the Vietnam War. Ron began his career after Vietnam in computer programming, management and sales in various companies in Arkansas, Texas and Oklahoma. Ron's hobbies included scuba diving, water skiing, tennis, bowling and pool. After moving to Tulsa he became passionate about bike riding a few years later. He enjoyed many rides, especially Hotter 'N Hell Hundred in Witchita Falls, Texas, Freewheel Oklahoma - a seven day ride from the Texas to Kansas borders across eastern Oklahoma, and Ron rode all the rides in the Tulsa area from Stillwater to Pryor and Muskogee. All of his rides were with his wonderful friends who knew his passion for riding and enjoyed his smiling disposition. He loved his bikes and continued riding even after many severe wrecks. Ron loved his dog Christy and loved his family and many friends. Ron suffered with Lewy Body Dementia and Parkinson's at the end of his life. He was genuinely interested in the treatment of these severe life altering illnesses. Ron became a faithful Christian and knew he was ready for his time with Jesus. He prayed daily for his family and friends and always relied upon Jesus to carry each of them through their troubles. He is preceded in death by his father and mother. LeRoy Beal and Marge Beal, and his sister-in-law- Lexe Beal. He is survived by his brother John Beal and wife Jeannie, of Oklahoma City, Oklahoma, his twin sister Rhonda Grossich and her husband Al of Tulsa, Oklahoma, and his brother (Robert)Bob Beal and his wife Peggy of Decatur, Arkansas. Ron expressed his sadness for not getting to spend time with nieces and nephews Kevin Kelly, Kelsie Cygan and her husband Tom, Shasta VanSickle and her husband Scott, Derek Beal and his girlfriend Sarah, Colby Beal and his wife Caitlin, and Hunter Beal. Great nieces Karsyn, Skylar and Clover and great nephews Matthew, Nick, Chase and Peyton. He is also survived by step-mother Beverly Beal and step brothers and sisters Kenneth, Lori, Wendy, Nancy and John; and a special long-time friend Warren. A beautiful in-loving memorial service will be held at Fitzgerald Southwood Colonial Chapel Funeral Home in Tulsa, Oklahoma on March 26, 2022 at 2:00 pm to remember Our Brother Ron Beal. Following the memorial service, Ron will be honored with the Military feature Guard of Honor and presentation of the United States Flag to the Family. Ron will also be remembered later in the summer at the Fort Gibson National Military Cemetery in Fort Gibson, Oklahoma for his honor and service as a soldier in the United States Marine Corps. In lieu of flowers, Ron wishes donations to be made to The Wounded Warrior Project https://www.woundedwarriorproject.org/donate, Lewy Body Dementia Research https://www.lbda.org/donate/ or Parkinson's Research Foundation, https://www.parkinson.org/ways-to-give.

The family of Ronald Eugene Beal created this Life Tributes page to make it easy to share your memories.

Send flowers to the Beal family.