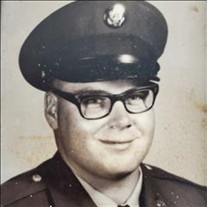 Ronald Dean Morrow, February 11, 2021, went to be with his Lord and his wife, Erma Morrow, who previously passed away November 13, 2010. They were married on December 27th which lasted for 38 years at the time of her death. He was born August 5, 1947 in Tulsa, OK. He was born a premature twin with his sister Donna Jean Morrow who passed two months later. He was a Cub/Boy Scout along with many of his friends and family. He learned how to swim and camp and gained life-long friendships. He played football as a defensive guard for Del-City High School where he graduated. He wanted to be a chef, but grandma did not think that would make him any money. At age 20, he was drafted in the Army on Aug. 22, 1967 and served two years. He chose to be a culinary specialist in which he was very successful. He served two more years in the Army Reserve. He then served 18 years in the National Guard and retired with a Honorable Discharge. He was promoted to Sergeant and received the Good Conduct Medal during his time of service. He was a sole survivor but did come under orders twice to be deployed to Vietnam, which were canceled by his CO due to his status. He was preceded in death by his twin sister, Donna Jean Morrow; daughter, Kimberly Morrow; parents, Walter Jr. and Bonnie Morrow; and wife, Erma Morrow. He is survived by three children and their spouses, Denny and (wife) Christy Morrow; Ladonna and (husband) Eugene Probst; and Kemmery and (wife) Elizabeth Morrow; grandchildren: James and (wife) Melissa Hoppe, Katlynn and (husband) Christian Davis, Jonathan Morrow, and Olivia Morrow; great grandchildren, Laney Hoppe, Emsley Harper, and James Alexander Hoppe. Funeral services will be held at 3 pm Monday, February 22, 2021 at the Green Hill Funeral Home in Sapulpa, OK with Pastor Kevin Wolfe officiating at the direction of Fitzgerald Ivy Chapel. Fitzgerald Ivy Chapel, 918-585-1151

Ronald Dean Morrow, February 11, 2021, went to be with his Lord and his wife, Erma Morrow, who previously passed away November 13, 2010. They were married on December 27th which lasted for 38 years at the time of her death. He was born August... View Obituary & Service Information

The family of Ronald Dean Morrow created this Life Tributes page to make it easy to share your memories.

Send flowers to the Morrow family.