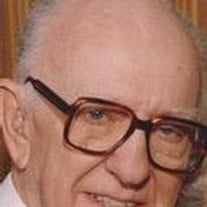 MAYS, Samuel Wesley, Sr., 93, passed away Sunday March 15, 2009. He was a resident of St. Simeon Episcopal Home. He was born November 13, 1915 in Pleasurville, KY, was one of eight children born to Jasper and Pearl Wills Mays. He graduated from Mississippi State University with a degree in mechanical engineering. He married Marcine Louise McGouldrick Mays on September 24, 1943. He served in the U.S. Army and following WWII he began a life-long career with National tank Co. He served the company in various locations including Seminole, OK, Eldorado, KS, Great Bend, KS and Tulsa, OK. While living in Great Bend, KS he was very involved in church, social and professional organizations. He was a founding member of the Great Bend Petroleum Club and Western Kansas Chapter of the American Petroleum Institute. He was a past president of both organizations. Mr. Mays was very active in Saint Rose of Lima Catholic Church and was a member of Saint Rose School’s first lay school board. He was transferred to Tulsa, OK in 1968 and worked in the design and engineering of off shore equipment. Following his retirement in 1979 he devoted endless hours to Catholic Charities. He enjoyed fishing and wood working, but he treasured most of all his time with family. He was preceded in death by his bride of 67 years, his parents, four brothers and three sisters. He is survived by four sons: Samuel W. Mays, Jr. and spouse Jan of Tulsa, OK, William P. Mays of Emporia, KS, Philip M. Mays and wife Novia of Edmond, OK, and Mark A. Mays of Tulsa, OK; five grandsons, two great-grandchildren, and one great-great grandson. Family will receive friends at the funeral home from 6-8pm Tuesday, March 17, 2009. Funeral Mass will be celebrated 1:00pm Wednesday, March 18, 2009 at The Madelene Catholic Church with interment to follow in Sapulpa. Fitzgerald Southwood Colonial Chapel, 918-291-3500. www.southwoodcolonialchapel.com

MAYS, Samuel Wesley, Sr., 93, passed away Sunday March 15, 2009. He was a resident of St. Simeon Episcopal Home. He was born November 13, 1915 in Pleasurville, KY, was one of eight children born to Jasper and Pearl Wills Mays. He graduated from... View Obituary & Service Information

The family of Samuel Wesley Mays, Sr. created this Life Tributes page to make it easy to share your memories.

Send flowers to the Mays, family.