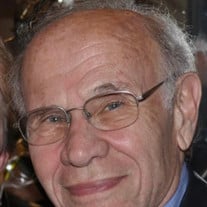 Dr. Samuel Reuben Oleinick A loving husband, father and grandfather, Samuel passed away December 21, 2021. He was born on February 29, 1932 to Julius and Evelyn Oleinick in Newark, New Jersey. The family moved to Brooklyn where Sam, along with his brothers, spent their early childhood. The automobile and defense industry took the family to Detroit. Sam attended Wayne State University where after three years he was accepted into the Medical School at the University of Michigan. After completion of his residencies, Sam enlisted in the U.S. Naval Reserve where he served his country as a physician. He retired as a Captain after serving 36 years. Sam attended Wistar Institute at the University of Pennsylvania where he received his Ph.D. in Microbiology. Early in his 50-year medical career, Sam worked within the Department of Immunology at Duke University. In 1972, Sam moved to the Department of Medicine at the University of Oklahoma in Oklahoma City where he directed the Tissue Typing Laboratory for organ and bone marrow transplants, and led the Clinical Immunology section. Medicine was a love of his life. Serendipitously, while working at the University of Oklahoma, he met the true love of his life, Glenda "Kay" May. Sam and Kay were married in 1986 and enjoyed 33 years of marriage until her death in 2020. Sam and Kay enjoyed their time together traveling and exploring the world seeing over 30 countries. Sam was a lifelong learner who had a passion for the arts, musical theater, and history. He had a special place in his heart for his niece and nephews. He treasured his relationship with his children and was the best Zayde. Sam loved to share his thirst for knowledge and learning with his grandchildren. Sam and Kay enjoyed taking their grandchildren on many adventures and helped create a love of travel. Sam was devoted to his faith and enjoyed serving his synagogue. In Oklahoma City, Sam was an active member of Emanuel Synagogue where he served as President, Chair of the 200 club, and Synagogue Board. When Sam and Kay moved to Tulsa, they became active in Congregation B'nai Emunah where he continued his religious studies and served on the Oklahoma Center for Community and Justice Interfaith committee. Sam is survived by his three children, son Stephen May, his wife Mari and their children Lauren (Derek) Doak and Taylor (Hannah) May; daughter Kara Mings and her children Mason and Kaylie; daughter Julie Casey and her husband, Brian and their children Connor and Allison; brother Arthur Oleinick; and nephews, Robert Oleinick, Lewis Oleinick, Jon Oleinick and Mike Stein; and niece, Susan Shapiro and their families. He is proceeded in death by his wife Kay, his parents, his brothers Morris Oleinick and Irwin Oleinick, and son-in-law John Mings. The family wishes to thank their extended family, friends, and all who loved and supported Sam. In lieu of flowers, please make donations in his loving memory to Oklahoma Medical Research Foundation (OMRF) https://gift.omrf.org/give/320323/#!/donation/checkout or to Parkinson's Research https://www.michaeljfox.org/donate/help-us-find-parkinsons-cure or charity of your choice. Fitzgerald Ivy Chapel, 918-585-1151

Dr. Samuel Reuben Oleinick A loving husband, father and grandfather, Samuel passed away December 21, 2021. He was born on February 29, 1932 to Julius and Evelyn Oleinick in Newark, New Jersey. The family moved to Brooklyn where Sam, along with... View Obituary & Service Information

The family of Samuel Reuben Oleinick created this Life Tributes page to make it easy to share your memories.