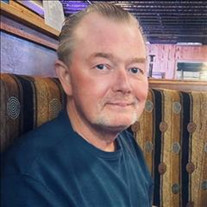 Scott Randall Turner, age 63, passed from this life on November 3rd, 2021, in Tulsa, OK. He was born on November 17, 1957 in Muncie, IN, to parents Barbara and Bill F. Turner. In his early years, after graduating High School, he accepted a position with American Airlines and relocated to several cities across the country, advancing his career within various leadership roles, until accepting his last position in Tulsa, OK as IT Desktop Support, AA/SABRE/EDS/HP. In Scott's journey, he then continued on with his technical support expertise, contracting with British Petroleum (BP) as their desktop support at the Tulsa campus. During Scott's journey, in December 1997, he met the love of his life, Lori Harrison, whom he married on May 16, 2002 in St. John, U.S. Virgin Islands. Tulsa has been home for Scott and Lori for the past 23 years, and even though he misses friends and family from afar, Scott felt Tulsa was his only real home. Scott loved traveling, cooking, building computers, puttering around the house and he has been especially proud of his weightlifting, since high school, and working out daily, with Lori by his side. Despite all the recent ailments that Scott endured, he always displayed a fun and loving attitude towards his friends and family, and was so looking forward to the day that he and Lori retired together, planning a spectacular last journey and continuing to be the rock in her life. He was taken from us way too early, but all our love and cherished memories will continue on in our hearts. He is survived by his loving and adoring wife of 19 years, Lori of Tulsa, step-children, Taylor and Connor. Also survived by his mother, Barbara, of Muncie IN, brother Timothy (Misty), sister-in-law Deborah (Joseph) UK, plus many nieces/nephews. He is preceded in death by his dad, Bill F. Turner and brother, Richard. Visitation will be held at Fitzgerald Southwood Colonial Chapel from 9:00 - 11:00 AM, on Tuesday, November 9th with a funeral service to immediately follow at 11:00 AM.

Scott Randall Turner, age 63, passed from this life on November 3rd, 2021, in Tulsa, OK. He was born on November 17, 1957 in Muncie, IN, to parents Barbara and Bill F. Turner. In his early years, after graduating High School, he accepted a... View Obituary & Service Information

The family of Scott R. Turner created this Life Tributes page to make it easy to share your memories.

Scott Randall Turner, age 63, passed from this life on November...

Send flowers to the Turner family.