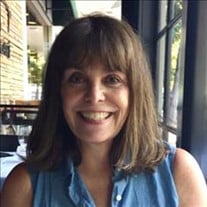 Shirley Ann Courtney of Tulsa, Oklahoma, passed away suddenly on April 24, 2020 from heart failure. She was 70 years old. Shirley was born in Sumpter, South Carolina on September 3, 1949 to Ingrid Franzkowiak and Dan Sweatt. Shortly after, Ingrid took Shirley to live with her grandparents in Germany where she picked up the German language, as well as a taste for order, functionality, and bread with seeds in it. Ingrid married Don Hewett and brought Shirley back to the states to further develop her charms in Oklahoma City, Oklahoma. There she graduated from U.S. Grant High School. Don and Ingrid gave Shirley her lovely siblings, Jeff Hewett of Broken Arrow, OK and Deanna Woodard of Tulsa, OK. Shirley moved to Tulsa, Oklahoma where she married and had two children, Tanner Courtney, of Tulsa, Oklahoma and Casey Courtney, of Brooklyn, New York. Yes, Shirley worked with Ford Motor Credit in financial services for most of her career, but she was better known for her advice and her opinions; tough, but fair. If you wanted to hear the truth of it, you asked Shirley. If you needed a reality check, you asked Shirley. Upon hearing of the accident, many of us first thought to call Shirley to seek her guidance. She was our North Star. Many wonderful things happened to Shirley in her lifetime, but probably the best of them was her late husband Gordon D. Smith. Their life together was exotic, ranging from a trip to Machu Picchu in Peru to a drive to the other side of Tulsa for a new ingredient from the spice market. They fell in love again and again throughout their 20 plus years together, bound by a love of simple pleasures like good tomatoes, Bob Dylan, and laughs that make you cry. Shirley is survived by her mother, Ingrid; her children, Tanner and Casey; her siblings, Jeff Hewett and his wife KayeLinn and Deanna Woodard and her husband, Daryl; her niece and three nephews; and of course, her many adoring fans. We are all scrambling to find a new rock, but for now we are grateful to have known her and to be surrounded by love. In lieu of flowers please make a donation to the Gordon D. Smith Memorial Book Fund, In care of Trinity Me Church, 1101 N. Mississippi, Little Rock, AR 72207 or Community Food Bank of Eastern Oklahoma (okfoodbank.org ), or the Humane Society of Tulsa (tulsapets.com ). It's better to burn out, than to fade away. Neil Young

Shirley Ann Courtney of Tulsa, Oklahoma, passed away suddenly on April 24, 2020 from heart failure. She was 70 years old. Shirley was born in Sumpter, South Carolina on September 3, 1949 to Ingrid Franzkowiak and Dan Sweatt. Shortly after,... View Obituary & Service Information

The family of Shirley Ann Courtney created this Life Tributes page to make it easy to share your memories.

Send flowers to the Courtney family.