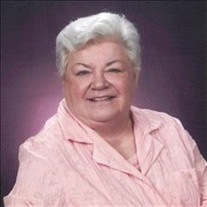 Shirley was born February 27, 1938, in Chicago, Illinois to Nicholas and Florence Bollin and was the oldest of three siblings. She passed away March 28, 2021 at the age of 83. Shirley graduated from Notre Dame Catholic High School in Chicago, where she played volleyball and was a soprano in the choir. After graduation, Shirley got her first job as a secretary in the insurance industry, working in a large firm in the heart of downtown Chicago. Shirley lived and worked in Chicago until she married in 1959 and moved to Lawrence, Kansas. To help support the family, Shirley worked for the University of Kansas Athletics Department, selling tickets to sporting events. In Lawrence, the family grew to three with the birth of daughter, Kathleen. The family soon moved to Oklahoma City where Jim Jr., Mike, and Mary Colleen were born, making Shirley a young mother of four. After a few years, the family moved to Lexington, Kentucky, where the youngest, Sharon, was born. In 1968, the family of seven moved to Tulsa and established roots. For 20 years, Shirley was a devoted wife and homemaker, Girl Scout Troop Leader, volunteer teacher's aide at Mayo Elementary School, and active parishioner and choir member at Church of the Madalene. She also dedicated time to volunteer for Meals on Wheels, Catholic Charities, and St. Francis Hospital Auxiliary. Her humor, outgoing personality, kindness, and strong work ethic made her as asset to all the organizations where she contributed her time and talents. After her children had grown, Shirley returned to work and decided to earn a college degree. Although she was nervous about being a college freshman in her 50s, she tackled the challenge with determination and confidence. Through a work-study program, Shirley began her 20-year tenure working at Tulsa Community College (TCC). She was the Executive Assistant to the Dean of Students while earning her Associate's Degree in Business Administration and Management in 1996. She then earned a Bachelor of Arts degree in Liberal Studies in 1999 as one of the first students accepted to the Tulsa-based degree program of the University of Oklahoma. Shirley worked at TCC in multiple departments until December 2010 when she retired as Grants Administrator. Shirley had a natural talent for singing and a devout Catholic faith. Because she considered her strong, clear soprano voice to be a blessing from God, she honored that gift by being a long-time member of the Church of the Madalene choir. She also garnered attention when she proudly belted out the "The Star Spangled Banner" at Tulsa Driller baseball games and other events, often receiving compliments from people seated nearby (in addition to playful eye rolls from her children). Shirley's family will always appreciate the happiness her singing brought to the people around her. Shirley's love of singing continued throughout her life. When she moved into Montereau Retirement Community in 2012, she was active in the chorus and most recently served as the chorus president. Even as her health deteriorated, Shirley sang to the nurses who cared for her. Some of the most cherished family memories include Shirley singing along to musicals on TV--The Sound of Music and Oklahoma were guaranteed "sing-alongs" in the Hays home. Shirley enjoyed traveling with her family and friends, taking adventures to Colorado, Washington DC, Hawaii, The Ozarks, Alaska, and across borders to Mexico and Canada, to name a few. Whether camping, cruising, road-tripping, or flying, Shirley was happy to experience new places and spend quality time with her favorite people. She also loved boating, reading on the deck, watching her kids water ski, or playing with her grandkids at the family's vacation home on Grand Lake in Grove, Oklahoma. Shirley's family will remember her strength in challenging times, her humor and infectious laugh, her enduring faith, her love of Rogers and Hammerstein musicals, and her belief in helping others and supporting the community. Shirley is survived by her children Kathleen Hoey and husband Paul (Sand Springs), Jim Hays and wife Becky (Broken Arrow), daughter-in-law Christy Hays (Tulsa), Mary Colleen Youngblood and husband Wayne (Owasso), and Sharon Geris and husband Mark (North Vancouver, BC, Canada). She is also survived by her sister Georgie Doucette and husband Richard (Franklin, WI), her nine grandchildren, 11 great-grandchildren, and many other family and friends. She was preceded in death by her son Mike Hays (Tulsa), her parents, and her brother Nicholas Bollin (Benton Harbor, MI). A Memorial Mass will be held on Tuesday, May 25 at 10:00 am at Church of the Madalene, 3188 E 22nd Street, Tulsa OK. The family requests, in lieu of flowers, that donations and memorials be made to Catholic Charities of Eastern Oklahoma, Meals on Wheels Metro Tulsa, or the Community Food Bank of Eastern Oklahoma.

Shirley was born February 27, 1938, in Chicago, Illinois to Nicholas and Florence Bollin and was the oldest of three siblings. She passed away March 28, 2021 at the age of 83. Shirley graduated from Notre Dame Catholic High School in Chicago,... View Obituary & Service Information

The family of Shirley Ann Hays created this Life Tributes page to make it easy to share your memories.

Send flowers to the Hays family.