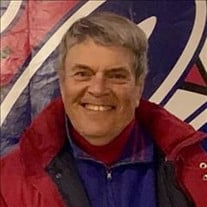 Stephen C. Cole, pharmacist and avid golfer, passed away on January 31, 2021 following a brief illness. Steve was born on July 23, 1944 in Bethany, Oklahoma and spent his childhood in Tulsa and at Grand Lake with his parents, Orville and Olga Cole. He graduated from Tulsa Edison High School and attended the University of Oklahoma, where he joined the Sigma Nu Fraternity. Steve graduated from the University of Oklahoma College of Pharmacy in 1969. After completing the United States Army ROTC program, he served as a base pharmacist at Fort Riley, Kansas, achieving the rank of Captain, and was honorably discharged in 1975. Steve later owned a small pharmacy in Russell, Kansas for over a decade and thereafter returned to Tulsa, where he lived and worked for the past 35 years. Possessing a strong work ethic and a deep level of caring for those around him, he was much beloved by his co-workers and customers. Steve spent much of his free time on the golf course with his dear friends, where he successfully shot 3 hole-in-1s in his many rounds. He was widely known for his colorful attire and boisterous personality. He also loved dogs, especially his beagles Henry and Beasley, and supported many local organizations that helped rescue and care for dogs. Steve is survived by his wife, JoAnne Cole of Tulsa; his daughter Paige Cole of Tulsa; his son, Ryan G. (Misty) Cole of Allen, Texas; his stepchildren Mandy (Eric) Marshall of Tulsa; Michael (Kristine) McClendon of Tulsa, Matt (Julie) McClendon of Mandeville, LA; Mark (Missy) McClendon of Wichita Falls, TX; and nine grandchildren who loved their ornery Poppy Steve. He is also survived by his brothers, Jerry Cole and King (Melanie) Cole of Tulsa. Steve was truly one of a kind and had a heart of gold. The world is a little less colorful and a little quieter because he is no longer in it, he was so loved and will be missed dearly. Friends wishing to honor Steve's memory can do so by making a donation in his name to the Tulsa SPCA, P.O. Box 581898 Tulsa, OK 74158, or online at Tulsa SPCA Fitzgerald Ivy Chapel 918-585-1151

Stephen C. Cole, pharmacist and avid golfer, passed away on January 31, 2021 following a brief illness. Steve was born on July 23, 1944 in Bethany, Oklahoma and spent his childhood in Tulsa and at Grand Lake with his parents, Orville and Olga... View Obituary & Service Information

The family of Stephen Charles Cole created this Life Tributes page to make it easy to share your memories.

Send flowers to the Cole family.